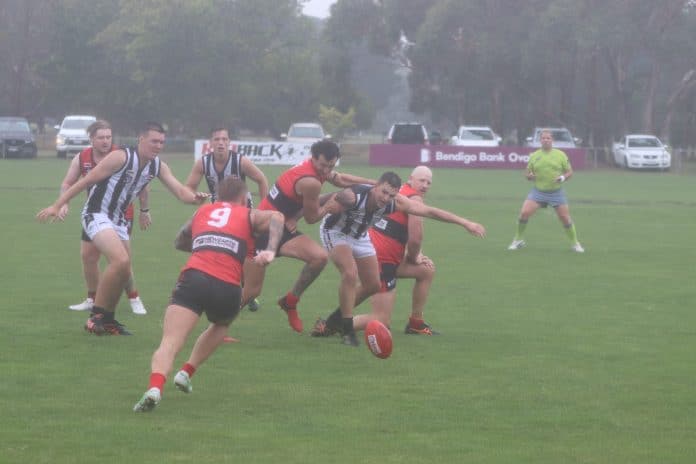 WALLAN Football Club has picked up where it left off last season, starting its 2022 Riddell District Football Netball League campaign with an 85-point road win against Romsey.

Tipped to win the 2022 flag, the Magpies entered this season with a similar list to last year, but have even more grit and determination to win their first flag in the Riddell league senior division.

It was a slow start to the match, tarnished by wind and sleeting rain, allowing Wallan to hold an 11-point lead into quarter time.

The Magpies put their foot on the accelerator in the second quarter, kicking five goals and extending their lead to 42 at the main break as the Redbacks failed to add to their score.

As the weather further deteriorated, the third quarter was less impactful, but Wallan was able to kick 1.3 to Romsey’s one point before the Magpies piled on six goals in the final term to secure a 13.11 (89) to 0.4 (4) win.

Wallan assistant coach Spencer Mathieson said the team was happy with its performance despite the tough conditions.

“We were pretty happy with how we played. The rain and wind made it tough conditions to play in but we managed,” he said.

“Due to COVID, we haven’t been able to play in wet conditions over the last couple of years, but everyone played well considering.”

Mathieson commended the efforts of the Redbacks, who made an effort despite some of their players missing the round one match.

He said the combined efforts of young and returning Magpies players led the side to the win.

“We knew they had a couple of players out and they had a pretty young team but they all had a go,” he said.

“We didn’t expect to keep them goalless but it was something we were pleased with at the end.

“Some young players from the under 19s stepped up and did a great job [including] Brodie Gilchrist and Cam Selvaggio [who made his debut in the seniors].

“Jarryd Bonello was back from injury – he only played one game last season, but he played really well at the weekend.

“There was also Sean Morris, Corey Baker, Lachlan Inness and Cody Lynch who all stepped up.

“Overall, it was just a good team performance, and now we’re looking forward to the game against Woodend-Hesket this week and what we’ll be able to do.”

This weekend, Wallan footballers and netballers have swapped their home games with Woodend-Hesket as renovations are underway at Greenhill Reserve, seeing the Magpies travel to Gilbert Gordon Oval. Meanwhile, Lancefield will host Macedon, while Romsey play away to Riddell.

Lancefield looking to the future