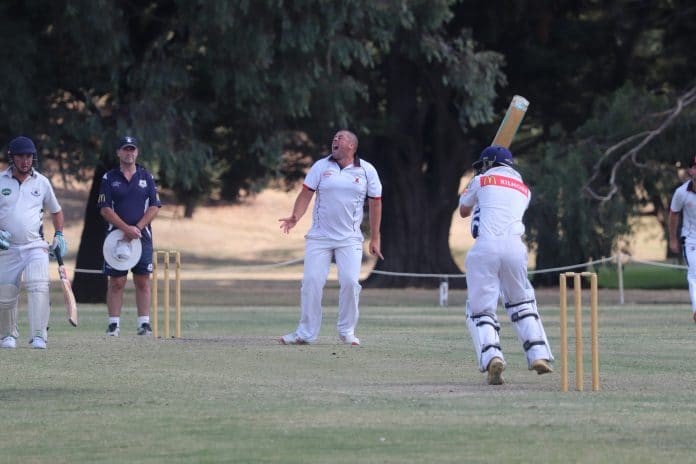 TALLAROOK’S streak of consecutive Seymour District Cricket Association, SDCA, A Grade finals appearances stretching back to 2014-15 hangs in the balance this weekend when it takes on Seymour at Chittick Park.

Tallarook has been an SDCA powerhouse for most of the past decade, winning premierships in 2015, 2017, 2019 and 2020, but the ‘Rook enter their round 15 clash with Seymour in fifth place on the ladder after their match against Eastern Hill was abandoned at the weekend, resulting in a draw.

The Rookers must win and hope Kilmore defeats Yea Tigers in a rematch of last season’s grand final if they are to finish inside the top four.

Saturday’s draw against Eastern Hill might have been a blessing in disguise for Tallarook after the Eagles batted first, setting a total of 6/144 from their 45 overs.

Tallarook’s run chase got off to a good start when Cam Muir and Ben Tarran put up 48 runs together, with Muir contributing 45 of them before Eastern Hill’s Tim Rudd-Schmidt had him caught behind.

Tarran soon followed, with only Tallarook skipper Lachie Watts able to stick around at the crease as Leigh Irving, Shane Topham and Andrew Dundon contributed only seven runs between them.

Coby Schulz had just joined Watts, who finished unbeaten on 26, when play was abandoned due to poor weather. It left the visitors still 59 runs short of victory with five wickets in hand and just more than 11 overs remaining.

Tarran was the best of the Tallarook bowlers with figures of 3/17 from nine overs, including three maidens.

Kilmore guaranteed itself a finals berth with an important win against Broadford at Kilmore Cricket Ground.

The visitors won the toss and elected to bat in an entertaining match that ebbed and flowed.

Liam Collier, 21, and Jake Martin, 32, kept adding to Broadford’s total, as Martin was bowled by Dale Tassone with only a few balls remaining.

Broadford’s total of 8/145 came despite a solid all-around bowling performance from Kilmore, with only Brett Buttler, 2/24, and Jayme Lowe, 2/25, taking multiple wickets.

The visitors got an early breakthrough when Jack Connell had the dangerous Tassone out caught and bowled for only eight runs, but a 56-run second-wicket partnership between Kevin Craddock, 29, and Marcus Davern, 60, put the team on track for victory.

Ben Dawson, 21, and keeper Jacob Walton, 17 not out, gave Davern plenty of support until he was bowled by Connell, who took a team-best 3/23 from nine overs.

Walton and Josh Buttler brought in the winning runs, guiding Kilmore to 5/146 with five overs to spare.
With Yea Tigers defeating Seymour by 66 runs on the back of Lawrence Heath’s 125 runs, every clash in the final round is vital.

Broadford can claim top spot on the ladder if it beats current leader Eastern Hill at home, while Kilmore could get revenge on the visiting Tigers for last season’s grand final defeat by knocking them out of the finals with a win and a Seymour loss to Tallarook.