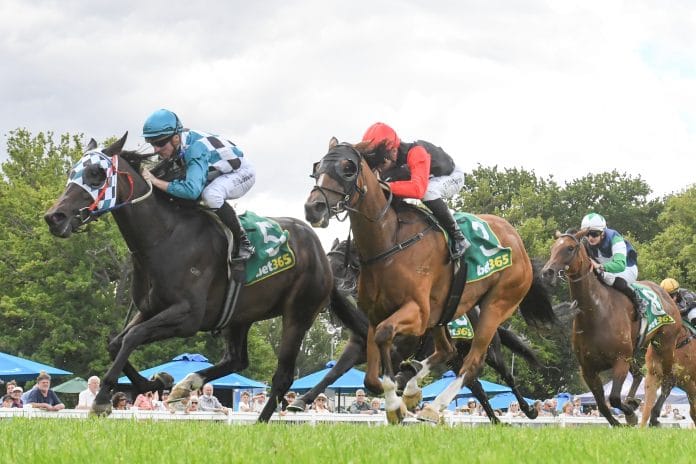 The former won in the L and G Sheppard and Sons Kyneton 0-58 Handicap with the rising 12-year-old Kazoom knocking out punters, starting at $31.

After being unplaced at his past four runs on the picnic circuit, the Pentire gelding, ridden by Robbie Downey, ‘sprouted wings’ in the straight to get up to defeat Pride Of Kinross, at $9 odds, by a short-half-head with the $3.80 favourite Miss Charlee Lyn a further one and three quarter lengths away third.

Kazoom, raced by Osborne and long-time stable client Alex Babauskis, has now won 13 races with 17 minor placings from his 96 starts.

Sell said he would give his stable star Boho Miss, $3.70, a spell after her impressive win in the following race – the Bobby Beare Memorial 0-58 Handicap over 1450 metres.

The four-year-old daughter of Redente and Kicha gave her rider Daniel Stackhouse the second leg of a winning double.

Boho Miss made it back-to-back wins in defeating $2.90 favourite Big Darryl by a half-head with Clever George, $26, third.

Sell said he would now send the mare for a well-earnt spell.

“It was a big run as she dwelt at the start and was three wide for a lot of the journey,” he said.

The mare has now won two races with four minor placings from her 14 starts.

Hoofnote: The Massey Ferguson Woodend Cup run over 1850 metres was won by the Patrick Payne-trained The Nephew. The three-year-old Wordsmith gelding was ridden by Daniel Stackhouse.

No double for Dwyer

In the first race, the judge declared All Too Creedy, $3.30, a short-half-head winner of the Scotty’s Firewood Handicap over 2308 metre, with correct weight given and bookmakers paying out.

After the last race, the rider of the horse that came second, claiming apprentice Melinda McDonald, went to the stewards claiming her mount Earl Of Kendall – a $2.40 favourite – was the winner in a deceiving photo.

All involved parties were called in and eventually stewards reversed the result.

The six-year-old Duporth gelding made it back-to-back wins, with leading rider Shaun Cooper again aboard.

Dwyer has saddled-up 12 winners on the picnic circuit since January 1.

Kilmore Racing Club will host a turf meeting on Thursday.

For Trackside dining bookings in the bistro or alfresco area, call 5783 0777.

Lilley and Mifsuds fly the flag at Kilmore trots