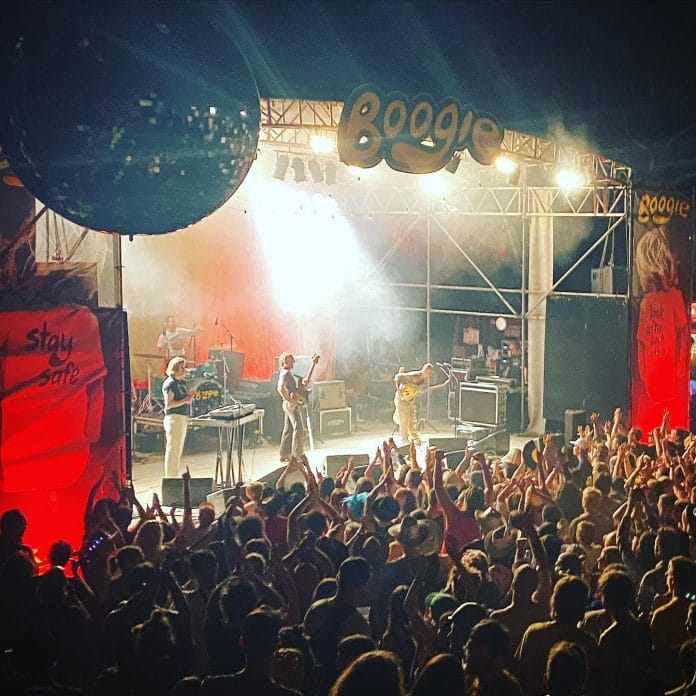 Our Friends Farm in Tallarook has applied to Mitchel Shire Council for amendments to its planning permit in a last-ditch effort to keep the annual Easter weekend Boogie Festival on site.

After sustained noise complaints from neighbours since the property changed hands in 2017, Boogie organisers announced that 2021’s three-day camping festival would be its last after more than a decade in Tallarook as it searches for a new home.

Boogie director Jeremy Gordon said the current noise and time restrictions had changed the nature of the festival and made the operation unviable, but that a permit amendment could change its fate.

The amendments seek to extend hours for a liquor license and delete a condition stating that noise levels must be ‘inaudible’ to surrounding dwellings after 10pm.

It also seeks to extend hours of operation to allow the Hillbilly Disco stage, which plays music until 3am, to operate outdoors after this year it was forced inside a 120-square-metre shed with a 100-person capacity, in order to dull noise.

Organisers said the amendments would bring the conditions in line with other camping music festivals across Victoria.

Mitchell Shire councillors heard submissions from Our Friends Farm owner Tanya El-Gamal, Mr Gordon, and 15 members of the public about the application and the future of the site at 210 Tallarook-Pyalong Road on Monday.

Neighbours, long-time and first-time Boogie attendees spoke in favour of the festival, saying the family-friendly event celebrated the town and provided an employment injection.

But opponents said their objections were not just about Boogie, arguing amendments to the planning permit would allow festivals and late-night noise ‘every long weekend’, infringing on their rights to ‘enjoy their properties’.

Seven residents raised concerns at the meeting about sleep deprivation due to music noise, which in the past had been allowed on the main stage until 1am but this year was pulled back to 10pm following complaints.

Bars were also forced to close early at 11pm on Good Friday and 1am on Easter Saturday this year, making a dent in the festival’s income.

Several opponents who live within a kilometre of the site, and one who lives close to five kilometres away, said they were kept awake over the Easter weekend – a special time for those of faith according to one speaker.

“My family are unable to sleep due the penetrating nature of the bass,” an opponent who works at Puckapunyal Military Base said.

“The effect of multiple days of sleep deprivation is significant and increases our risk of poorly executing our duties [in the workplace] and/or death or injury to ourselves or to others.”

A guest house owner on a nearby property said it was a ‘disgrace’ that her guests were kept awake during their long-weekend stay.

“Our holiday stay is promoted as a farm holiday with peace and quiet being paramount to our guests’ stay,” she said

“Mitchell Shire Council has in the past promoted Tallarook as a peaceful village, and currently as a picturesque country town with an abundance of wildlife and farming properties.

“How many times does our community have to say no to the unacceptably loud music at all hours of the night from the festivals held at Our Friends Farm?”

Opponents were also concerned about alleged illegal activity and the behaviour of the attendees, claiming they camped on the road, wandered onto neighbouring properties, and drove intoxicated.

The claims were denied by neighbouring residents and Mr Gordon, who said breath tests had always been offered at the end of the weekend, and this year only one person who recorded over the legal limit decided to drive out; the rest remained on site.

One resident who has lived on Tallarook-Pyalong Road for more than 30 years said he didn’t know what a music festival was until he attended his first Boogie in his 60s to ‘see for himself’ what kind of event it was.

“The way these festivals are run and the types of people that attend, they’re just fun-loving people, teenagers through to people my age. I’ve been two or three times now and I’ve never seen any bad behaviour,” he said.

Ms El-Gamal said independent noise monitoring this year showed the festival had complied with the noise limit of 65dB between 12pm and 10pm at surrounding residential dwellings.

“During the day, when music noise is permitted at its loudest, [music was] ‘not measurable above ambient noise’, meaning no music was recorded,” she said.

“I remind you that this amendment is not to extend the hours of operation, the main stage will still finish at 1am as it has and always has.

“The amendment proposes a safer and more efficient use of the site, during already permitted music hours on the permit.”

Council’s will decide on the planning permit at its ordinary meeting on Monday night. For full report on the decision, see the North Central Review’s website next week.