Emergency services were notified following the break-in at a rural property, home to Seymour 103.9 FM’s transmission tower, just before 10pm on Saturday, July 4.

Four people forced open the front door to the building on Telegraph Road and remained inside for a short time before an alarm sounded.

All four fled on foot, however they returned about 30 minutes later. 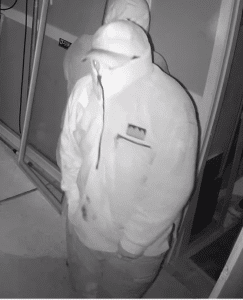 They entered through the open front door and forced their way into an inner locked room inside the building.

Several radio transmitters and other items were stolen from inside the storeroom, some of which were recovered by local residents who handed them into police.

Before leaving, the offenders set fire to the building which caused extensive damage to the property.

All four offenders were wearing hoodies and jackets and had their faces partially covered however, one of the men has a distinctive tattoo on his right hand which is depicted in the footage. 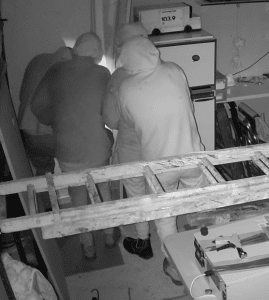 Detectives have also released CCTV of the offenders in the hope someone will recognise them and provide any information on their identity.

Anyone with information is urged contact Crime Stoppers on 1800 333 000 or submit a confidential crime report online at www.crimestoppersvic.com.au.