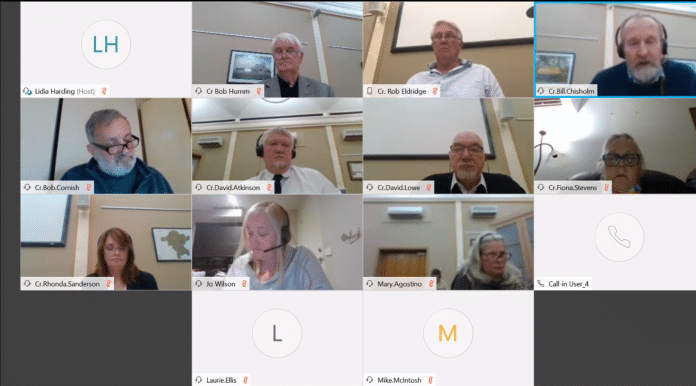 Mitchell Shire Council’s online council meetings have been ratified with the approval of a livestreaming policy.

During the ongoing COVID-19 pandemic, local governments across Australia have been scrambling to work out how they would be able to co-ordiante council meetings while ensuring social distancing between councillors, staff and the public.

This led Mitchell Shire Council to host its April meeting in the larger Broadford Shire Hall while also streaming on Vimeo.

Macedon Ranges Shire Council’s March meeting was outdoors before deferring the entire agenda until it could introduce online meetings.

Councils were hamstrung by the Local Government Act which stated councillors had to attend meetings in person before the COVID-19 Omnibus (Emergency Measures) Act 2020 was introduced last month, requiring councils to hold virtual committee and council meetings from May to November.

For a councillor to be present at a meeting, they must be able to see their colleagues, hear the proceedings and be heard when they speak.

If they can only join via audio link, a councillor can only listen in and not participate in debate or take part in proceedings.

Mitchell Shire Council’s May meeting was the first time councillors and staff met online via a WebEx video conference, which was then recorded and uploaded to the council website and Vimeo account.

According to the new policy, recordings of council meetings will remain on council’s website for four years, in line with the publication of minutes.

However, the chief executive has the authority to remove all or any part of any recording that is considered inappropriate to publish.

Content considered to be inappropriate could include material that is defamatory, infringing on copyright, a breach of privacy, offence, abusive or discriminatory, inciting hatred or confidential council information.

Cr Bob Humm said he hoped the ongoing costs of the streaming would be kept low.

“I think it’s a really good system and will improve the ability to get everything out to the public so they can be aware of what goes on at council,” he said.

“We’re catching up with the kids out there, which is good to see, so good luck to everyone,” he said.