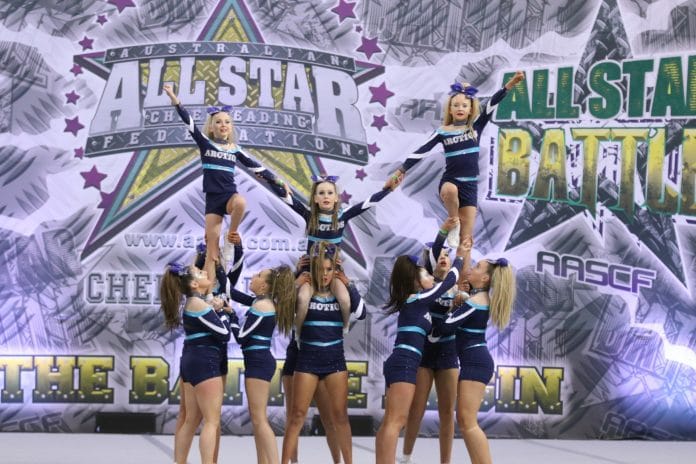 Kilmore Arctics Frostbite Cheerleaders were named grand champions and won a place in a national competition at the Australian All Star Cheerleading Federation’s Victorian Battle Competition.

The Battle is a two-day event where cheerleading teams perform their two-and-a-half-minute routine twice over the two days and compete against teams from across the state.

Kilmore Arctics Frostbite is the Arctics’ Senior All Star Cheerleading team made up of 11 athletes aged 10 to 16, who train each week.Arctics coach Lauren Mamalis said the team was leading by just 0.1 of a point after the first day of competition.

“After a great performance on day one and a near-perfect performance on day two, the Frostbite girls found themselves sitting out in front by a full 1.8 points with a score of 83.2 to claim first place in their division for the competition,” she said.

“To top off their performances over the two days, they also won grand champions for their division, which goes to the highest scoring gym in each level and a Pinnacles bid, which allows them to compete in a best of the best one-day competition against all other small gyms from around Australia in December this year.

“These girls all love the sport of cheerleading and are so excited to compete at this event.”

Kilmore Arctics Frostbite cheerleaders have five more competitions lined up for the rest of the year, including the Aussie Gold International in Queensland in October and the Australian All Star Cheerleading Federation Nationals, where they’ll compete against Australia’s best and a guest international team.

“We’d love to see the local community get around these girls and show their support,” Ms Mamalis said.

“If you see any of these girls with their Kilmore Arctics tops or jackets, we’d love you to give them a congratulations or a sign of support on their upcoming competitions, they will love the support and it will push them to compete at their very best.”