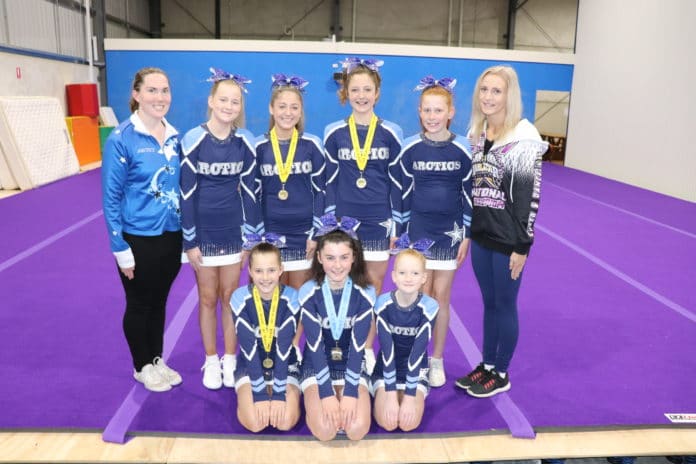 JUST moments before the Kilmore Arctics Cheer and Dance squad took to the stage for their first ever competition, head coach Ashley White tinkered with their learned routine to change it up.

The young squad, following all the changes, took to the stage and managed to take a win for their stunt, while placing seventh overall at the AASCF Winterfest in Melbourne recently – despite all the nerves.

Courtney Abela, 14, said she was proud of her teammates and was excited to compete again with the group.

“It was great getting back into competing and was so much fun… the highlight was winning because it was our first competition and being able to do that was great,” she said.

“We were pretty stressed out, but once we got on the floor there was lots of fun. The goal is now to just get better.”

While Courtney has experience in competing, some of her teammates, like young Jessica Riolo, 12, have only been competing for about a year.

This fact made the win all the more special, and Jessica said she could not wait to go back out on the stage.

“It was an amazing time, we have put a lot of effort into this and I can’t believe how amazing it went,” she said.

“I didn’t dream of winning a competition this early but it was a good surprise to see us place first.

“There was a lot of practice that went into it. The most exciting thing was getting on the floor and hitting the stunts.”

Head coach Ashley White said she was proud of each one of the competitors.

“These girls are all original students and they have worked so hard, and really well, and I could not be prouder of them,” she said.

“It was amazing to be part of. To be able to coach them there was incredible; we only put the chorography together two weeks before hand… then changed it in the warm up.

Kilmore Arctics Cheer and Dance owner Lauren Mamalis said she was overwhelmed at how good the team went.

“We have only been cheering for 12 months so it was fantastic.”

Going straight to the youth