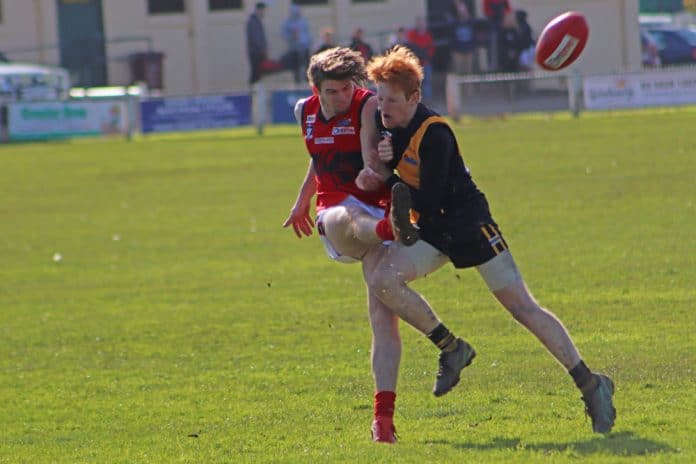 ROMSEY solidified its place on top of the RDFNL ladder with a 208-point away win over local rivals Lancefield on Saturday.

Lancefield was able to put some pressure on the ball early but it didn’t take long for the Redbacks to strike and the goals just kept coming after that.

A single behind was all the impact the Tigers could make on the scoreboard for three quarters while Romsey piled on 9.6 (60) in the first term.

The Redbacks continued to keep the scoreboard ticking over, adding 6.8 (44) to their tally in the second term to lead by 103 points at half-time.

It was more of the same in the third term as Romsey puts its foot down and blew the lead out to 160 points at three-quarter time with a nine-goal quarter.

Lancefield’s second and final behind came in the final term while the Redbacks booted another 7.7 (49).

Romsey coach Corey O’Sullivan said it was a good win after a week off.

“It was good to get the percentage and good to get back into footy a week after the bye,” he said.

O’Sullivan said the Redbacks’ midfield was strong across the ground.

“Jason Caruana played a really good game, Nathan Blair, Jack O’Sullivan and Matt Burkett were all great. It was a pretty even performance,” he said.

Lancefield will look to right the ship next week when they travel to Rockbank with a chance for their second win of the season.

Meanwhile, Romsey has a proverbial eight-point game next week when it hosts second-placed Riddell.

O’Sullivan said he hasn’t beaten Riddell in his time coaching the Redbacks and looks to change that on Saturday.

“Riddell are a fantastic side and I’ve never beaten Riddell in my time coaching the Romsey seniors so that’s something I’d like to remedy,” he said.

“It’s going to be a tough game. When you look at a ladder, it looks to be an eight-point game.

“There are a few things to watch with Riddell, they have some super players and play a good brand but it’s more about what we do well. If we execute, we give ourselves every chance.”