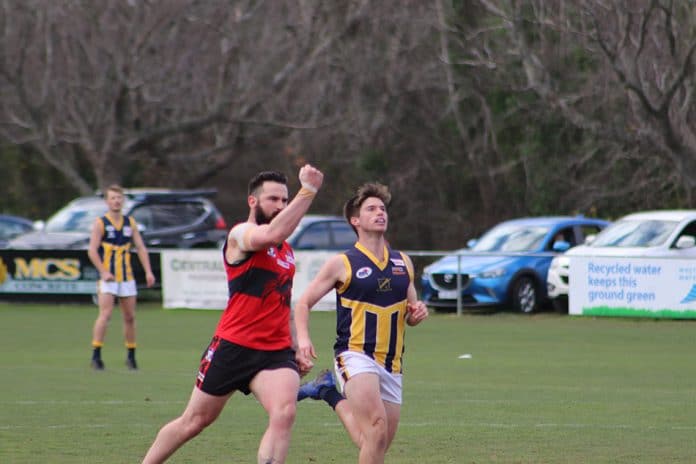 The Riddell District Football Netball League match of the round saw Romsey take its seventh win on the trot over Rupertswood.

The Redbacks were able to get a measure of revenge over the Sharks who previously gave Romsey the one blemish on their 7-1 record in round one.

Romsey coach Corey O’Sullivan said he was happy to keep the momentum going.

“There was always that chance you have a bit of a letdown the next week but we were really happy to come away with the win because Rupertswood played a really good game of footy and were able to shut down a lot of what we were trying to do,” he said.

“We think we were lucky to get away with the win in the end. They missed some crucial shots at goal they probably should’ve kicked so we probably got away with it but we were happy to.”

In what was always going to be a tight contest, nothing could separate the two sides after the first term as they each went into quarter time with 2.1 to their name.

Rupo created some distance in the second term, opening up a nine-point lead after kicking 3.3 to Romsey’s two straight.

The Redbacks came out of the sheds for the second half with an extra spring in their step and kicked four goals to three to bring the margin back to two points at three-quarter time.

“It was one of those games like a final where you have the ascendency for five or six minutes and if you can capitalise you have the slight advantage,” O’Sullivan said.

“The third was really even but for the five or six minutes we were on top, we managed to score goals.”

Romsey carried its momentum into the final term and held Rupertswood to a single goal while booting three of their own for a win that keeps the Redbacks on top of the ladder.

O’Sullivan said he received good efforts from players at every position.

“I was happy with the efforts all over the ground,” he said.

“Both games this year have been decided by basically two more scoring shots on Saturday and one more in round one so both could’ve gone either way.

Romsey travels to Broadford to take on the Kangaroos on Saturday.

Northern clubs ready for the bounce