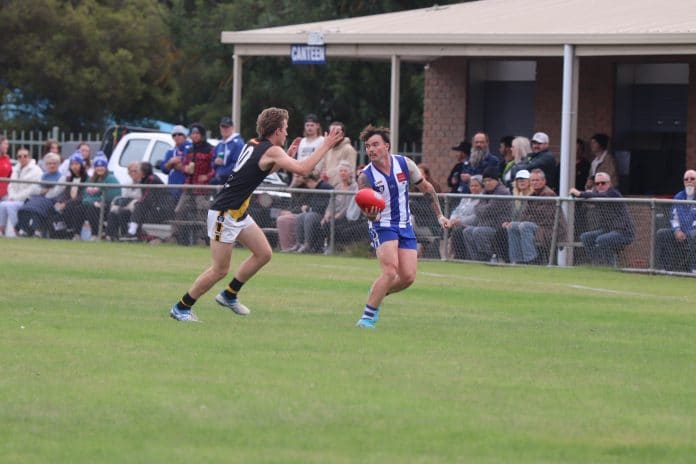 BROADFORD Football Netball Club has recorded its first senior football win in the Outer East league, smashing the Yea Tigers 20.17 (137) to 4.4 (28) on Saturday.

The win was one of four, out of a possible five, for the Kangaroos’ teams across football and netball at Harley Hammond Reserve, kicking off the 2022 season with a strong start.

Led by new senior coach Jayden Welch, previously an assistant coach for the seniors and a former reserves coach, the side dominated from the get-go, keeping the visitors to one goal at the main break and leading 58-9.

Only conceding a further three goals to its 11 after half time, Broadford comfortably ran away with a 109-point win, placing the Kangaroos on top of the ladder at the conclusion of round one.

Welch said there were a lot of pleasing signs to come from the Kangaroos’ performance, the side already implementing what it had learnt during the pre-season.

“There were some real positive signs out of the day. There definitely is a lot to improve on, but it was a great way to start our season,” Welch said.

“The boys started to look for the right options, try some new things and do what we practised.

“You could see them really trying to implement the new zone structures we’re putting in place and looking for different options when [moving the ball].”

Welch was also impressed by some of his younger debutants who stepped up to the challenge.

“Gus Norris, he was an epic contributor and by far one of our best, Duggie [Sean Duggan] kicked five, but we had a lot of players who stepped up and played a team performance,” he said.

“Our three young debutants in Charlie Neilson, Ty-Reece Morgan, who only managed a couple of minutes unfortunately after being injured, and Tynan Howard all stepped up also.”

The side is now looking to its next opponent Kinglake, which Welch said would prove a challenge for the Kangaroos.

“We’re always looking forward to the challenge and what the rest of the season will hold for us, but its exciting to see where we are at after this weekend and what’s possible,” he said.

“We could have said we want to come in and win the flag but we want to be realistic, and just play football that’s a lot more even to the competition and hope we can have a few wins.

“At the end of the day, we just want to stand strong against the opposition and coming up against Kinglake this weekend will test that.”

There was no reserves match as Yea cannot field a team this season.

The A Grade netballers led the way on the court, recording a 32-goal win.

Renee Sari, who played her 50th game for the Kangaroos, also celebrated her move up into the A Grade goal shooter position by confirming she has what it takes to play in the top side, shooting 32 goals.

Last year’s division two A Grade goal attack of the year Ally Black closely supported Sari’s performance with 23 goals of her own.

Club president Bonnie Cavanagh said she belived it the success showed positive signs of what was to come at the club.

“It was a very exciting day for the club and just the start we needed after such a challenging pre-season and long build up to season 2022,” she said.

“The netballers put in a really strong performance, with only our under 17s narrowly missing out on a win, however showed excellent signs of potential in their first year at the club.

“For our footballers, the win has been a long time coming and just an amazing reward for effort put in during the off-season, as well as them all sticking by the club.

“There is still alot to improve on, but Saturday has provided us all with a fantastic base to build on throughout the season.”