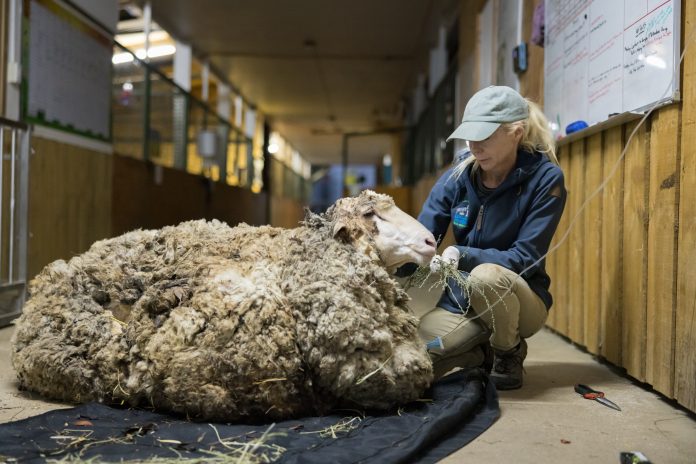 EDGAR’S Mission sanctuary in Lancefield rescued a sheep earlier this month, found in poor health with 40 kilograms of wool who could not stand as a result.

The sheep, named Alex, was found by a bushwalker at Mount Alexander in central Victoria, with his situation similar to Baarack, another sheep rescued by the sanctuary last year with almost 35 kilograms of wool.

Edgar’s Mission founder and director Pam Ahern said it was lucky Alex was found when he was.

“I’m not sure how long the poor fellow had been lying there,” she said.

“Judging by the length of his fleece, he had not been shorn in many a year, and had he not been found when he was, he would have passed from this world.”

Workers at the sanctuary worked to quickly remove the 40 kilograms of fleece, allowing Alex to stand on wobbly legs soon after.

“I am not sure who was more relieved when the job was done,” Ms Ahern said.

“However, there was a collective sigh from one and all.”

Ms Ahern said the team at the sanctuary saw similarities between Alex and Baarack, both being about seven years old and of Merino breeding. Both were suffering from not being shorn but were able to survive long enough to be rescued.

Shortly after being shorn, Alex was greeted and welcomed by Chloe and Molly Brown, two elderly sheep that were rescued by Edgar’s Mission.

Birds of prey at Clonbinane