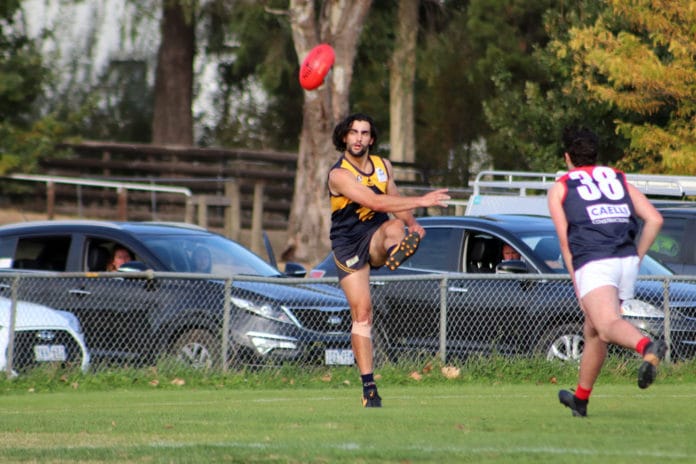 Whittlesea remains undefeated in the division two of the Northern Football Netball League after a three-point win over Diamond Creek in a nail-biter at home on Saturday.

The Eagles trailed at every break but were always within a couple of kicks before stealing the win with a tense 2.5.17 to 1.2.8 final term.

Whittlesea were down early, facing an 11-point deficit in the first term before fighting back to close the gap to five points at half-time.

Both sides were even in the third term, making for a great finish for the Eagles faithful.

It was a massive effort for the Eagles, who were playing with a two-man bench for three quarters after Riley Dyson broke his ankle and Clancy Bland rolled his ankle in the first term.

Xavier Dimasi was a key player for Whittlesea, kicking two goals including a snap from the boundary after taking a beautiful diving mark on the goal line.

Whittlesea coach Blair Harvey he was proud of the way the side stood up.

“I put it down to the massive pre-season. They didn’t give up all day but in the last we were able to stand up, get in front and hold on,” he said.

“Xavier was great all day, probably our best player and he was supported by Murphy on the half back flank. Nathan Stefanile in the ruck was good all day as well.

“We’ve still got five or six out and we’ll get three or four back after Easter then there’s a couple others we’ll get back after the bye which will be good.”