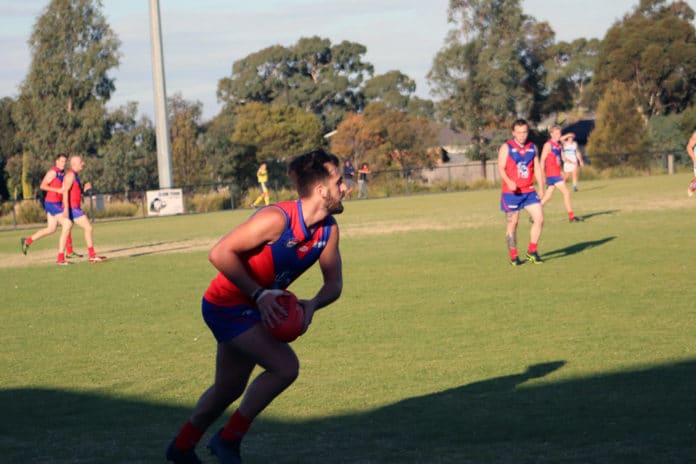 Kilmore scored its first four points of season 2019 with a four-goal win over Mernda, who are yet to record a victory.

The Blues led from start to finish, with seven point quarter-time lead blowing out to 32 points at half time as the Blues kicked 4.2.26 and kept the Demons to a single behind in the second term.

The lead was extended again to 44 points at three-quarter time with a four goal to two third quarter to Kilmore.

A Mernda fight back quarter made for an interesting finish as the Demons more than doubled their three-quarter time score with six goals while keeping the Blues to two goals but it was too late for the Demons.

Nicholas Zaharakis, Shane Skidmore and Michael McCulloch each kicked three goals for the Blues while Daniel Smith, Matthew Campbell and Joshua Coe each kicked two for the Demons.

Kilmore coach Nathan Phillips said the Blues had a few things to work on from last week and the work paid off on Saturday.

“We had a couple things we needed to work on and fix and the boys did that and we were able to get the win on the back of changing all those up,” he said.

“We just took the foot off the pedal late but credit to Mernda for the fight back, they showed a bit of pride in their performance but we did enough work early to make sure the margin was beyond doubt.

“Leigh Irons was super in the middle, his defensive work at stoppages to allowed us to be in top in there. We lost there last week and he took that pretty personally and made sure it wasn’t going to happen again.

“Nathan Zaharakis was good again and created a few goals for other guys and to get nine goals from our permanent forwards was a pretty good return too.”

Laurimar are nearing the top of the ladder after a 64-point away win over Lalor in their division three NFNL clash on Saturday.

The Power continued to keep the scoreboard ticking over in the second half with a 5.3.33 to 1.3.9 third term to push the lead out to 41 points at three-quarter time.

Laurimar stormed home, keeping Lalor goalless in the fourth quarter and kicking four goals to run away with the win.

Josh Williamson and Jacson Cecil each kicked five goals for Lauimar in the win.

The Power are now second on the ladder, undefeated and 152 percentage points behind Panton Hill.