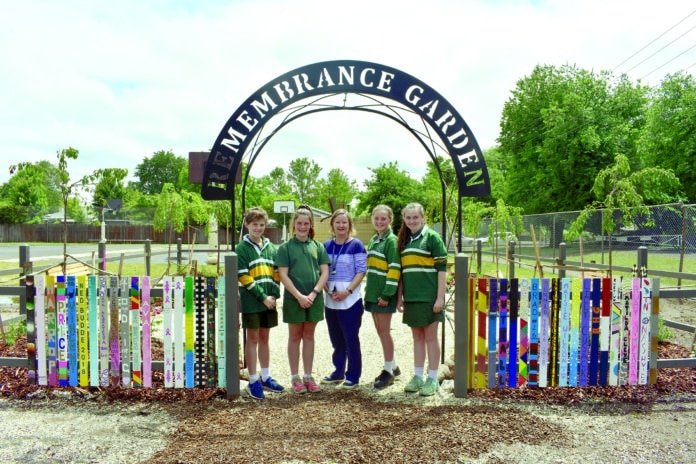 ST MARY’S Primary School in Lancefield commemorated “those loved and lost” at a ceremony in their newly constructed Remembrance Garden on Monday.

St Mary’s Teacher and Community Liaison Leader Jo Shannon conceived the idea after receiving a Gallipoli Oak – a tree propagated from acorns stemming back to World War One – as part of the Gallipoli Oaks Project in 2013.

Five years later Mrs Shannon was surprised to hear that the school would be receiving the tree.

“When we received the oak, I had a think about what we could do with it,” she said.

“Some of my students had previously approached me about doing some fundraising after losing a loved one to cancer, so I thought about creating a garden in remembrance of those lost.”

St Mary’s students Sophie Manton, Scheldon Forbes, Eliza Reid and Angus Nuttall – who have all lost a parent to illness or cancer – formed the SSEA group to fundraise and brainstorm ideas for the new garden.

Ms Shannon and the students decided to create a tree and garden in remembrance for each of the six students who have lost someone close – the SSEA group members, Occy Cuthbert and Annabel Schoobridge.

“The senior playground was bare but through fundraising, donations and discounted or free products and labour the garden has been completed,” Ms Shannon said.

“I got on to a local welder Graham Stanton, he gave us his time and materials. He worked with the kids, each of them have designed an artwork that’s on the fence.”

Sophie Manton chose a cow to represent her father who passed away from cancer.

“My Dad grew up on a farm in Shepparton, he was such a farm boy,” she said.

On Monday, a ceremony was held where teachers and families came together to view the completed project.

“We all invited family and friends to come and we played songs that meant something to us,” Sophie said.

St Mary’s Principal Julie McDougall noted how significant the ceremony was to everyone involved.

“It was done really respectfully. There was time to pause and reflect, the families were smiling and taking pictures,” she said.

“It was a real community led project, but Jo really got this off the ground, she came in on her own time and had family help out.”

All the families involved were given their own picket to design and place on the fence – something that has been now expanded to grade 6’s and other members of the community.

“I’m pleased that I’ve left a legacy – something that can last forever.”