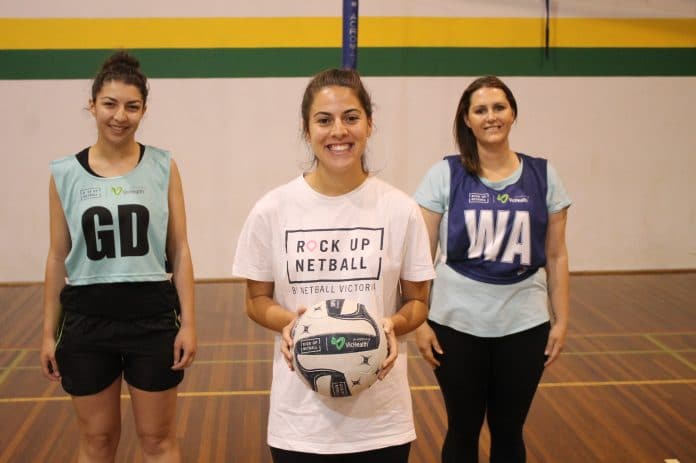 A NEW way of playing netball has taken Broadford by storm, with an eight week tournament kicking off recently.

Rock Up Netball, an initiative between VicHealth and Netball Victoria, allows people of all ages, sizes and skill levels to join a social netball competition where no scores are kept.

Netball Victoria’s Product Development coordinator Vanessa Abela said the aim was to increase fun for all.

“Rock Up Netball is aiming to increase participation for women, creating a fun and social way to play the game,” she said.

“It is relaxed with no uniforms and we want to be able to provide the community with a  chance to have fun.

“We have made sure the environment is one people want to be part of and we want individuals to come register as well as teams… it is about fun.”

She described herself as a passionate netballer and said she loved the relaxed experience in Rock Up Netball.

“The good thing about Rock Up Netball is that you can come down and not know the people you are playing with, it makes for a fun environment,” she said.

“It is interesting to play with people of all different skill levels and it is a very diverse group… I love it.”