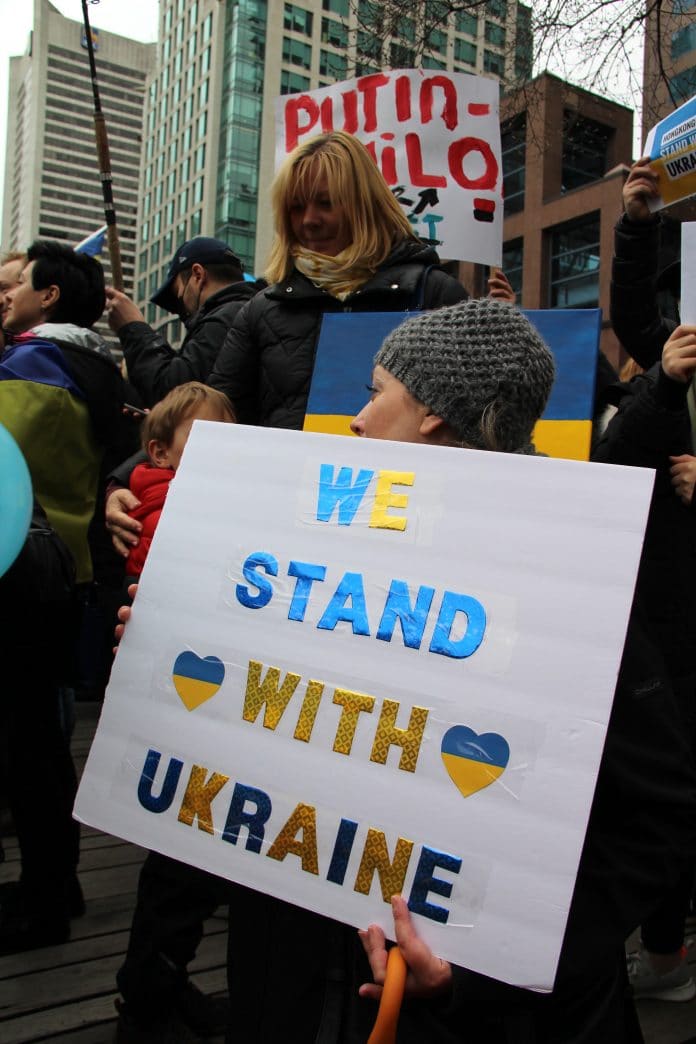 MACEDON Ranges Shire Council will stand in support with Ukraine including lighting up Kyneton Town Hall in the country’s blue and yellow colours for seven days.

At last week’s ordinary meeting, Cr Anne Moore put forward a motion in light of the ongoing war between Ukraine and Russia.

The motion suggested that council should stand with Ukraine and its citizens; provide supportive assistance to Ukrainian refugees who are seeking shelter in the shire; and express gratitude and thanks to members of the community, not-for-profit organisations, government agencies, telecommunications companies and council staff who are providing aid to Ukrainian refugees.

Cr Rob Guthrie, who presented on behalf of Cr Moore in her absence, noted the council had received submissions from residents who wanted to provide support to Ukrainians.

“What we are saying is that we want to stand with the people in Ukraine and show them the support of this community and when they get here … we want to see what we can do to help them,” Cr Guthrie said.

“We know that some organisations already provided support such as a telecommunications company, which has given them free phones and allowing them free calls back to relatives in Ukraine.

“Yes [the motion] could have been worded slightly different, but the intent is there.

“We want to show that this council stands with the people of Ukraine and supports them totally against this aggression that’s happening at the moment.”

Mayor Jennifer Anderson said it was important to ensure Ukrainians, both residents and refugees that came to the shire, were provided with support by the council and community.

“Although some people may see this at tokenistic, the lighting up of the Kyneton Town Hall, it is a public display, it’ll make people think,” she said.

“There couldn’t be a citizen out there that doesn’t know what’s happening in the Ukraine at the moment, and having those colours there will let people know that we are very much aware of the plight of these people and that we are providing support.

“We do have citizens in the Macedon Ranges that do have Ukrainian heritage that are fearing for people that they know in the Ukraine and may have already lost relatives.

“There are a lot of people feeling this here in the Macedon Ranges and although we can’t do a lot of the big picture stuff, I think we are doing an amazing job of what we are doing.”

Cr Geoff Neil opposed the motion before further stating he felt council could do more than what Cr Moore put forward.

“I do support the motion but … my position is that I just don’t think it goes far enough,” he said.

“I feel that lighting up the Kyneton Town Hall is not going to help those Ukrainian residents that are on the ground in that country currently suffering greatly due to the situation.

“My emphasis is I think we need to do something more tangible than just light up the town hall and ensure there is just housing and adequate supplies for those that arrive here.

“I think we should go one step further and make an effort to support those actually living through this, through medical, water and other substantive means.”

Cr Janet Pearce said council was doing whatever it could to assist those affected by the conflict.

“There are many ways that we have been supportive from the beginning and continue to support. I just wanted to make sure that it is very clear that we do take it seriously being the Refugee Welcome Zone and continuing to work with the community and many organisations in our shire,” she said.