ORGANISERS of Whittlesea’s annual community carols have a message for anyone who thought the COVID-19 pandemic might prevent the event from going ahead this year – you can’t cancel Christmas.

The carols will be hosted online for the first time next month in lieu of a physical event to comply with social distancing requirements.

While the pandemic has presented many challenges for the long-running community event, organiser Brett Cardwell said it gave the community a chance to connect with the carols in a new way.

Mr Cardwell has been recording performances from several schools and community groups during the past few weeks.

He said the new format required organisers and performers alike to get creative.

“At the moment schools aren’t allowed to sing in groups; we’re hoping that will change, but what we’ve got the primary school doing is drawing the story of the Aussie bush Christmas,” he said.

“We’ll take those elements and animate that as well as having video of the kids singing individually.”

Mr Cardwell said supporting businesses and people who had been affected by the pandemic was also a priority for this year’s carols.

“We’ll have interviews in the main street and show some of the shop owners who have been doing it tough,” he said.

“We really wanted to reach out and encourage the community to have fun. We’re going to give away some prizes.

“Santa Claus will be in the video with a bit of comedic relief, doing things like going down the water slide at Funfields, taking a ride in a CFA truck and going over some jumps on a motorbike.” 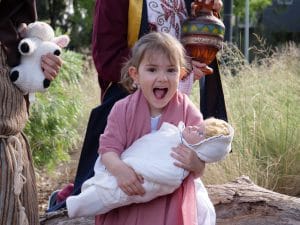 The carols will be streamed for the first time on Friday, December 18 on video-hosting website YouTube, and will be available to watch any time thereafter.

Mr Cardwell said Santa would give hints to viewers about phrases or visual cues to look out for during the live stream of the video, and the first people to comment would win prizes.

Chair of Whittlesea Ministries – the organisation responsible for the carols – Ivan Peterson said it was inspiring to see the community come together to keep the event running in a new format this year.

“We need community connections during these difficult periods more than ever before, except perhaps following the bushfires 12 years ago,” he said.

“We plan to share involvement through local traders and use it to really help build on the sense of community.

“It’s a continuation of a heritage of community carols, bringing together the churches, community groups, the CFA, the CWA, Lions Club, Ulysses Motorcycle Club and others.

“It really is a community-building and community-connecting exercise, not just a performance.

“By working this way to develop and present the carols, we’re building on those connections that were forged by fire.”

“We’ll see how we go, but the main thing is to bless the community and say thank you and have some fun and encourage people,” he said.

“People have been looking for some sort of hope and joy in their lives this year, and now we’ve come to the end of it and we can say, ‘well, that was a tough one’ but we can still have a laugh and celebrate that Christmas spirit.

“There are so many people who need help this Christmas and so many who need support in the community as far as the shops and local businesses go.

The online premiere of Whittlesea Christmas Carols will be at 7.30pm on Friday, December 18.

People can watch the video by searching for the Events in Whittlesea channel on YouTube.

Uniting children and police through video