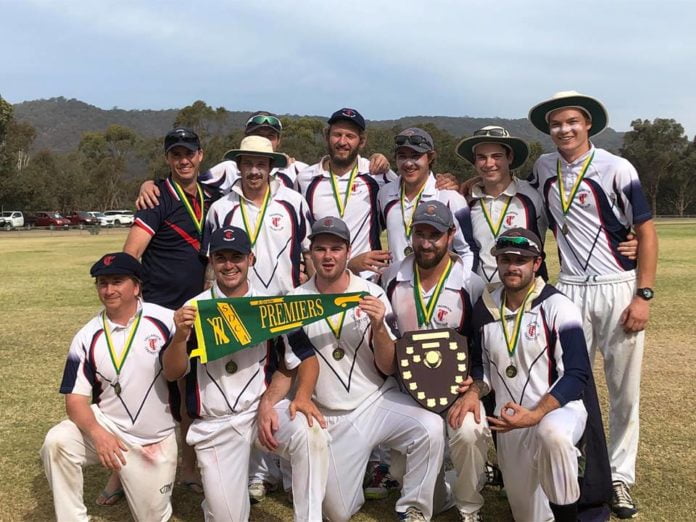 TALLAROOK are the 2018/19 Seymour District Cricket Association A Grade premiers after a comfortable 82-run win over Yea.

It was a dangerous start for Tallarook in front of their home crowd on Saturday with both openers falling cheaply to have the hosts 2/12.

Jac Smith-Williams (31) and Mitchell Itter (39) combined for a 53-run third wicket stand to put Tallarook back on the right track.

Solid partnerships and 35 runs from Cameron Muir had the hosts 7/138 and the tailenders kept the scoreboard ticking over until the side was bowled out for 164 after 73.4 overs.

With a whole day to play, Yea could’ve taken its time but got off to a horror start at 4/6 after just six overs.

It’s luck didn’t change much as the visitors were bowled out for 82 after 35.2 overs.

Darcy Pell (13) and Marc Steiner (43) put together a 31-run partnership to get the visitors back on track but Yea’s lower order dropped like flies.

After Pell was dismissed, only one Yea batsmen reached double figures while the remaining bats struggled to get on the board.

Irving said once the momentum started, it kept going.

“It was pretty special. Will Dundon’s been the best bowler all year and to take a couple early ones got the momentum going,” he said.

“It was surreal, it just started and it kept going for us. We were able to hold on to catches and that made the difference for us.

“Yea had beaten us three times this season and we felt like an underdog so to get the win against a good side.

“We didn’t have the mental edge but we were able to overcome it on the day, was pretty special.”

Irving said it was great to be able to take seven wickets but he was more proud to be able to help get his side to the top of the mountain.

“It really was amazing. My personal achievement didn’t worry me but to be able to lead with the ball and do it when it mattered was huge.

“I was more proud that I got the team there than anything.”