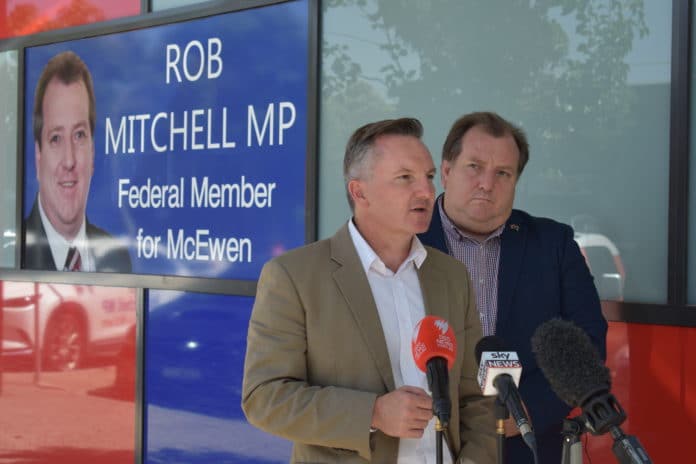 Priorities for this year’s Federal Election were the focus when Shadow Treasurer Chris Bowen and Federal Member for McEwen Rob Mitchell met at Craigieburn on Saturday.

Amid a battle on tax policies between Mr Bowen and Treasurer Josh Frydenburg, Mr Bowen spoke publicly outside Mr Mitchell’s office claiming the Treasurer is “all tweet and no action”.

The Shadow Treasurer told the North Central Review the purpose of his visit to McEwen was to discuss issues that were important to the community.

With infrastructure and health for the Mitchell Shire at the forefront, Mr Bowen spoke about the pressures of living in a growth corridor.

An estimated 48,000 people live in the Mitchell Shire, with experts predicting the population to boom to an extra 250,000 in the next 30 years.

“I understand the pressures in the Mitchell Shire that come on when your population increases dramatically,” Mr Bowen said.

“If it’s taking you an hour to get home when it could take you 40 minutes if the roads were improved, then we need to take a look at that.

“I’m not here to make announcements or to bring out my cheque book, I brought my ears and will take things back with me.”

With tax changes on the federal agenda, Mr Bowen believes delivering tax relief to low and middle income earners will directly assist those living in the Mitchell Shire.

“We’ve chosen to prioritise tax relief because wages aren’t growing. Everything is going up except wages – the one thing we can control directly is tax relief.”

Mr Mitchell said the proposed changes would impact most in the community.

Labor hopes to retain the negative gearing tax break for only newly-built homes and not existing investors.

“We’ve been working really hard on policies like negative gearing and all the things that help young people get into housing and to buy their first homes,” Mr Mitchell said.

Mernda testing site on the move