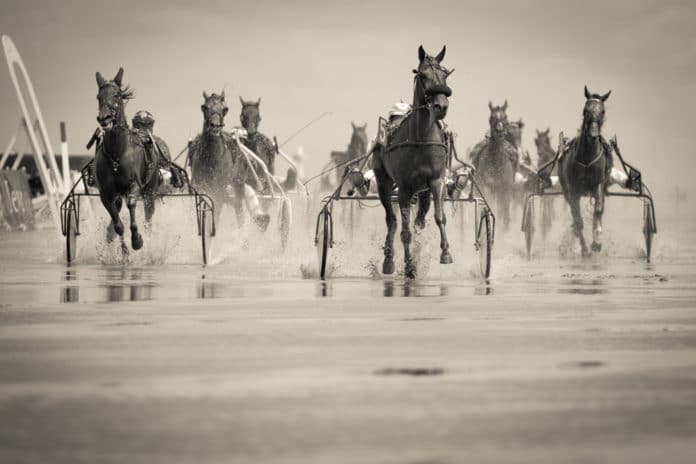 Raced by Aussie’s wife Julie, Meghan, a former New Zealander, was taken back to the rear from outside the front line as Could Dowitharain led from the pole before handing over to the winner’s stablemate Spotlight, driven by Chris Alford, mid-race.

The race changed complexion in the last lap as Gee Cee Calder sprinting sharply from one-one dashed away on the home turn with Spotlight raising another effort and Meghan joining in three wide on straightening.

It was a great night for the Cardigan stable of Emma Stewart when Art Major-Smyrna Duruisseau colt First Responder greeted the judge after racing exposed in the MC Security 2Y0 Maiden Pace over 1690 metres, accounting for Joyful by 11.6 metres and Chirripo which led from the pole, finishing 3.9 metres away third. The mile rate 1-56.5.

Driven by Jodi Quinlan, Heavenly Sign proved too strong at the finish to score by 3.8 metres in a mile rate of 1-58.5, from Our Kinky Boots and Sweet Creation third, a nose away.

After guiding First Responder to victory earlier, he was victorious aboard his own charge four-year-old Art Major-Jasper Jo mare Mytime in the 2180-metre Jet Roofing Maiden Pace.

Mytime ran home strongly from midfield to register a 14.4 metre margin in advance of leader Son Of Zodiac, with Stylish In Black third 16.1 metres away.

Blitzern came away from the inside at the bell to go forward with Interest Free ahead of him doing the same for Ellen Tormey only to be left exposed, giving Blitzern the perfect trail home.

When Interest Free raced away on turning, Blitzern was in hot pursuit and finished best to prevail by a head only in 1-55.8. Pocket The Deal was third 6 metres away.

After being slowly away from gate five, Fly Bye Eden had worked into a one-one spot racing for the bell as Good Feelings led from gate four.

When A Perfect Dance raced to the front on turning, Fly Bye Eden was poised to pounce and that’s what he did, racing away to a convincing 14.4-metre victory in advance of A Perfect Dance, and Major Comment was 2.3 metres away third. The mile rate 2-01.3.

The next Kilmore meeting is on Thursday.

Kilmore Racing Club thrilled with the success of Kilmore Cup