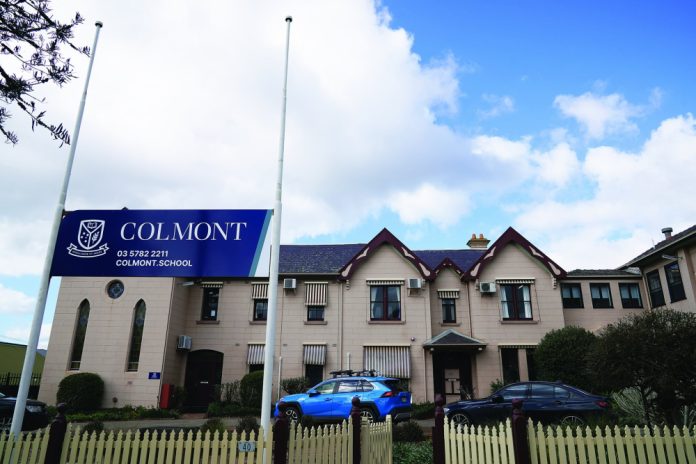 By Colin MacGillivray and Lauren Duffy

Tears, hugs and raw emotion marked the departure of Colmont School students from years three to 10 on Friday, with students, families and teachers left with few answers about the Kilmore school’s closure.

It left the families of more than 300 students scrambling to find their children a new school within days.

Colmont, which changed its name from The Kilmore International School on July 1, is one of less than 20 schools in Victoria offering an International Baccalaureate, IB, program in lieu of VCE.

Parents were in disbelief at hastily arranged meetings on Wednesday and Thursday night, with some refusing to accept that the school would close.

Principal Peter Cooper attended the meetings but did not address the families.

In fact, many families were not informed of the initial Wednesday meeting, and the first they heard of the school going into administration was an email from State Government school regulator the Victorian Registration and Qualifications Authority.

Administrators from insolvency firm Vince and Associates said they would keep the school open for year 11 and 12 students until they could secure alternative study arrangements.

The school reportedly needed at least $4 million to get through this year – and administrators said the school was ‘going to run out of cash within eight weeks’.

In recent weeks, the school’s board members had approached local MPs, state and federal education departments, and banks in hope of finding a resolution.

The school, which is registered as a charity with the Australian Charities and Not-for-profits Commission, ACNC, recorded a loss of $620,836 in 2020, the last year it submitted a financial report.

A financial report for 2021, which should have been filed by June 30, was marked as overdue by the ACNC.

Colmont’s board of directors chairman Rod Dally said the primary factor behind the school’s financial insolvency was COVID-19, which resulted in the loss of many international students.

“The root cause of this is the locked borders and losing a substantial number of students who couldn’t come back because of COVID-19,” he said.

“Although we’ve been working hard to recoup the finances, we weren’t able to this year. About 50 of our students went home and didn’t come back, and that killed our finances. We’ve been working actively to try and correct that.

“A lot has happened in the past 12 months, but the critical factor by a long shot was COVID-19.”

Mr Dally, who has been on the school’s board since 2014, said he was devastated for the school community.

“There are upwards of 450 families who are involved in this including the staff, the teachers and the students.

“It was never supposed to turn out this way, but unfortunately it has. We’re trying to come to grips with what’s happened.”

Mr Dally said there was ‘no financial mismanagement’ on the part of the board.

However, The Age has reported the school’s finances to be more complicated, and on top of international border restrictions due to COVID-19 that resulted in less boarders, the school board spent much of the past two years in a legal battle against historic, third-party contracts.

When sold in 2019 by the school’s founder Ray Wittmer, it meant the school’s land, buildings and associated intellectual property, such the licence to use the TKIS name, was owned by companies based in China.

The Age reported the contracts included $500,000 to use the TKIS name, and $1.6 million for ‘student services’ to a group of companies created by Mr Wittmer but then sold to a Taiwanese businessman Chien-Long Tai and his wife Yuyu Chen.

The school severed both contracts at an estimated cost of more than $1 million in legal fees and compensation, and then announced in April it would change its name, with plans to leave its current site.

Mr Wittmer did not want to speak on the record when contacted by the Review last week.

But he told The Age ‘the decision to dump the student services agreement failed to save the school money and instead contributed to its collapse’. He said the main cause of the school’s closure was financial mismanagement.

Administrator Ian Grant said he and fellow administrator Paul Langdon were yet to establish what led to the school’s collapse.

“We’ve been appointed since Tuesday and we’re not looking at how the school got to this circumstance yet,” he said.

“We’re prioritising year 11s and 12s and how we can keep their schooling going through really difficult circumstances.”

He said reports that parents had been asked to pay school fees in advance for next year as late as Wednesday afternoon were concerning.

“We’re looking at funds that were paid before our appointment and what we’ll do with those. Funds paid after our appointment will definitely be quarantined and there should be no further correspondence from the school.’

Mr Grant said administrators and teachers were united in their aim to support students.

“When you take over a business in voluntary administration or liquidation and tell employees the difficult news that they’re most likely losing their jobs, they don’t usually respond as well as the teachers here have responded,” he said.

“The teachers aren’t caring about their own personal employment as much as the welfare of the kids, which is amazing to see.”

Parents were told by the school’s administrators via email on Friday that pre-paid school fees and security deposits were being reviewed to assess if they could be returned, but gave no guarantee.

Editor’s note: The site of the old St Patrick’s Primary School site opposite Assumption College is not associated with Colmont School, and current works are unrelated.