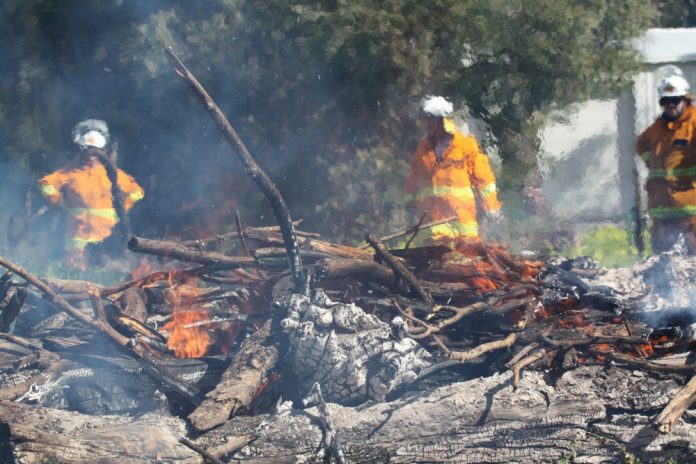 The Wallan community is rallying around a couple who lost their home and three dogs in a tragic house fire on Saturday last week.

Wallan fire fighters believe the use of welding equipment outdoors sparked a blaze at the Wedding Drive residence of long-term locals Darren and Mandy Rhodes on the afternoon of June 18.

The owners escaped the fire, but lost three dogs to the blaze.

Wallan Fire Brigade captain Nathan Anderson said neighbours calling triple zero allowed emergency services to be on the scene quickly, but they were not in time to save the property.

“One of the residents was doing some maintenance around the house and the fire started inadvertently,” he said.

“There’s praise for the neighbours for a lot of early phone calls. I believe the police happened to see it at the right time and managed to get there before everyone. Early phone calls to triple zero have probably kept the damage to what it was.

“Unfortunately, one dog was found hiding in one of the back sheds, but three others were inside.”

Mr Bayre said his parents were ‘absolutely heartbroken’ and were struggling to process the events.

“My mum lost her mother only six months ago and has not had a chance to mourn her passing and now this has absolutely broken her,” he said.

“I’m reaching out … in hopes that people … can contribute to rebuilding some sort of life for my parents.”

As of Monday afternoon, the page had raised more than $8000 for the couple.

Mr Anderson said fire crews initially had trouble locating fire hydrants on the street, and reminded residents to leave them visible and unobstructed.

“It’s probably a timely reminder that anyone who has a hydrant on their property needs to keep it clean and well-marked for obvious reasons,” he said.

“It didn’t affect the outcome of this particular situation, but it’s a challenge we face pretty often.

People can donate to the Rhodes’ fundraiser by visiting www.gofundme.com/f/emergency-support-for-mandy-and-darren-rhodes.

Rubbish leaves Salvos down in the dumps