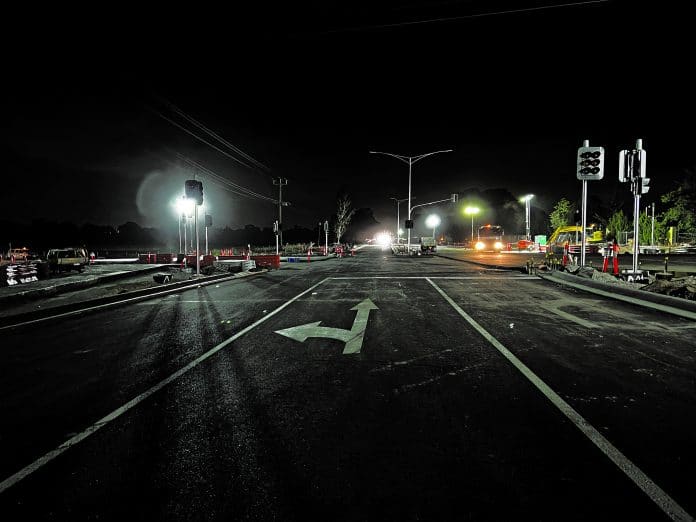 Major road works finishing early has allowed the intersection Craigieburn and Mickleham roads to reopen nine days ahead of schedule.

Construction crews worked around-the-clock between February and March to remove an existing roundabout.

The intersection is now open with an additional lane in each direction, a newly-laid asphalt surface, temporary traffic lights and a 40 kilometre per hour speed limit for 24 hours a day.

The project has included more than 42,000 cubic metres of rock, sand and clay moved over seven weeks, and more than 5710 tonnes of asphalt laid, allowing for the installation of permanent signals and pedestrian crossings later this year.

Underground equipment and connections for new traffic lights have been installed and room has been created for new lanes to be added.

Over coming months, crews will continue working at the intersection to complete the remaining sections including building remaining lanes, installing permanent traffic lights and other associated works.

“Craigieburn Road is a critical link for the local communities that make up Melbourne’s northern fringes and these major works are another step towards helping people get where they need to go sooner and safer,” he said.

A new traffic light crossing for pedestrians will be built near the near the Craigieburn Sports Stadium and D.S. Aitken Reserve.

Craigieburn Road connects residential areas in the north to key routes, nearby freeways and the Melbourne Airport, carrying up to 28,000 vehicles each day.

The Craigieburn Road Upgrade is expected to be fully complete by 2025. For project updates, visit the project page at bigbuild.vic.gov.au/projects/mrpv/craigieburn-road-upgrade.