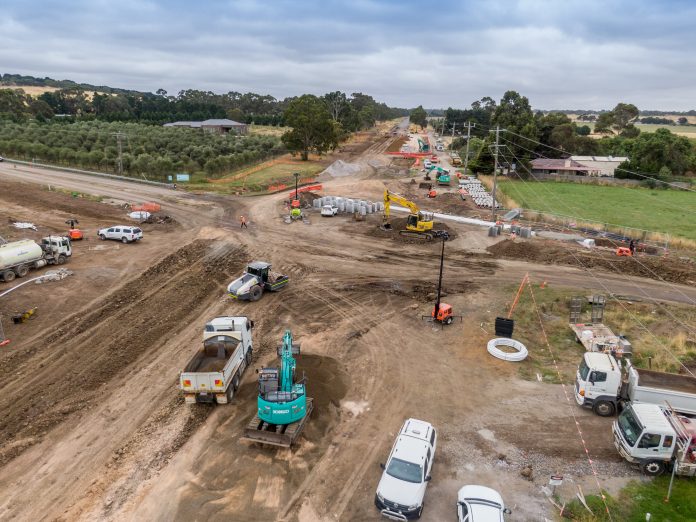 One of Craigieburn Road’s busiest intersections will soon be less congested for drivers following the demolition of an existing roundabout.

Construction crews are working at the Mickleham Road-Craigieburn Road intersection to install underground equipment and connections for new traffic lights and make room for new lanes to be added. Asphalting works are now underway.

The new multi-lane signalised intersection is taking shape and expected to be completed next month.

The intersection, with temporary traffic lights, is expected to open from April 11.

After working to rebuild the road foundation, upgrade drainage and install new electrical connections, crews have started laying the new road surface on southern extents of Mickleham Road, while major works at the intersection continue.

Previously, the roundabout intersection had single lane approaches, which made it difficult for vehicles to flow consistently, especially during peak times.

Additional lanes and traffic lights will ensure drivers slow down and are able to turn or cross the intersection easier, improving safety and traffic flow for road users.

Major Road Projects Victoria project director Dipal Sorathia said detours were in place throughout the intersection closure and encouraged drivers to avoid the intersection wherever possible, allowing an extra 20 minutes to complete their journey.

“It’s great to see the roundabout gone, an important step in making this intersection less congested for locals and for traffic coming from Wallan into Craigieburn and surrounds,” he said.

“We’re not wasting a minute in making this intersection simpler and safer for the people who rely on it every day.”

“We’re doing all we can to limit disruption on the road network, but as expected we are seeing delays while we work. Thank you to everyone for your patience – please continue to plan ahead before you travel.”

Once reopened, crews will continue working at the intersection into late-2022 to complete the remaining sections including building remaining lanes, installing permanent traffic lights and other associated works.

Major Road Projects Victoria expect the works to make a considerable difference on Craigieburn Road for the approximately 28,000 vehicles that travel it every day.

At the other end of the project, major works are also underway at Craigieburn Road and Hume Highway to create the room for additional turning lanes, easing congestion and improving safety.

For more information about works and planned disruptions over autumn, visit bigbuild.vic.gov.au.