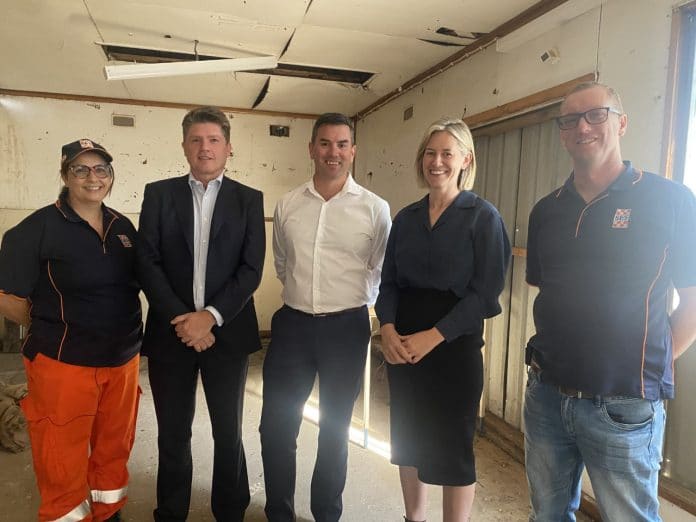 By Tricia Mifsud
Kilmore’s Victorian State Emergency Service, VICSES, leaders say without government support, the unit will fail to keep up with the demand of callouts in its service area.

Member for Euroa Steph Ryan, Shadow Minister for Emergency Services Brad Battin and Liberal candidate for McEwen Richard Welch visited the Kilmore unit’s facilities earlier this month to hear from its leaders about the need to upgrade the space to allow for more volunteer recruitment.

On a tour of the facilities, deputy unit controller Simon Halman explained to Ms Ryan and Mr Battin there was inadequate space to conduct training sessions with any more recruits than they currently have.

“What we need is to grow our member base, but to do that we need to have the adequate facilitates to be able to train these people, and then we’ll be in a position to respond more effectively,” Mr Halman said.

“Mitchell Shire is the fastest growing local government area in the state, and the population growth expected is astronomical so we want to be ahead of that. We need to be prepared for the future and today we’re not.

“John [VICSES Kilmore unit controller] has a list of people that want to join but we can’t take them because we don’t have the facilities to be able to train them, so we’re sitting in an inadequate situation.”

Mr Halman said the unit didn’t provide a comfortable environment for women and other genders, and people with disabilities or physical impairments.

“There are members of our community who may not be able-bodied or can’t contribute at responses but want to be involved in some way, and we’ve also got a broader male and female community, and those who [identify as other genders] that we just can’t all cater for without current facilities,” he said.

“The toilets and office spaces are upstairs, it is a shared washroom space, and downstairs our locker area is open, which can make it uncomfortable for people to get changed quickly when heading out to a job.”

VICSES Kilmore has experienced a significant increase in callouts, from about 180 calls for assistance in the 2014-15 financial year to 489 in 2020-21.

Ms Ryan said without an upgrade to facilities the amount of volunteers at Kilmore SES would not be able to cope as the population grew.

“I came here last year and saw how badly the SES need some love and obviously they’re working in an area of great growth and demand for the work they do is only going to grow in coming years,” she said.

“It’s not just about the volunteers who give their town, but the community more broadly, why we need to work towards improvements of this facility.”

Mr Battin described the facilities as ‘atrocious’ and unable to provide for the growth in population.

“The first thing on our list was to come to the Kilmore SES and now I know why. We see some sites around that are in poor or average condition then we see some that really need something done,” he said.

“Some of the sheds that we walked through here, it’s just atrocious to think that they’re even on a site, on a government property, and our role is to make sure their voices are heard.

“We want to make sure they [the State Government] hear what’s happening out here in Kilmore because at the end of the day the growth that we’re seeing out here is all approved by government, therefore infrastructure needs to be delivered or the government is failing those people they are letting move here.”