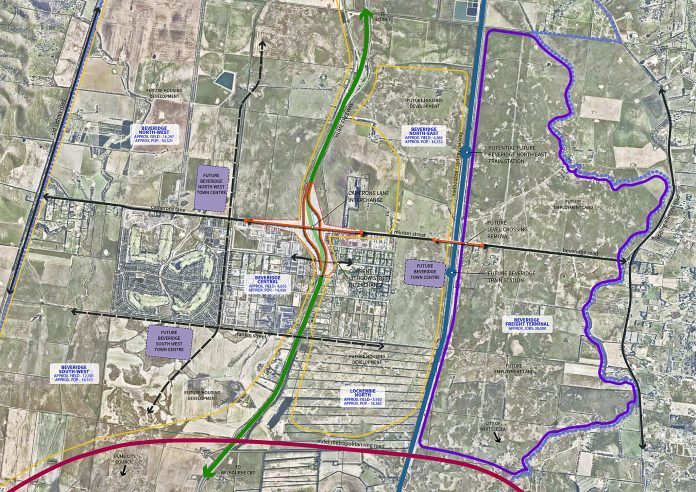 MITCHELL Shire leaders have called on the Federal Government to match Labor’s commitment to building the Camerons Lane interchange on the Hume Freeway at Beveridge, describing it as key to the economic future of the region.

Opposition Leader Anthony Albanese visited Beveridge last month to announce $150 million for the project if Labor was successful at this year’s federal election.

He said the interchange would pave the way for jobs and population growth in the region.

More significantly, it was described as the single biggest piece of infrastructure enabling a proposed Beveridge Intermodal Freight Terminal, BIFT, which council said would create a further 20,000 jobs.

Council is pinning their hopes on the BIFT being built in Beveridge, providing a major employer in the shire.

The BIFT would serve as a hub for the Federal Government’s Inland Rail project – which is designed to transport rail freight more efficiently between Melbourne and Brisbane – to connect to the road and port network.

Once operational, the terminal would enable freight to be transferred from Victoria’s two largest ports of Melbourne and Geelong to the rest of Australia.

The project is expected up to deliver up to $13.3 billion of benefit to the nation annually, and almost $4.6 billion annually in Victoria.

Council modelling estimated the interchange would also allow the building of up to 30,000 homes in Beveridge, creating more ongoing jobs through construction and development, while also opening up opportunities further afield through direct access onto the Hume Freeway and Seymour rail line.

Cr Chisholm said the current Lithgow Street interchange was outdated and unsafe after being built decades ago to service a small rural township.

With Beveridge’s population set to explode from about 5500 residents to an estimated 30,000 in the next two decades, Cr Chisholm said Camerons Lane would become a major arterial road in and out of Beveridge.

“It will be one of the most significant and transformation road projects for Melbourne’s north and will position Beveridge as the centre of the next chapter of population growth in the state,” he said.

“Investment in this vital piece of infrastructure now will reduce years of congestion and traffic bottlenecks as our population grows. And there are huge financial savings going early.

“We don’t want to be retrofitting our community. Early delivery of significant infrastructure, such as Camerons Lane Interchange, is what helps to build a strong and resilient community.

“A diamond interchange at Camerons Lane on the Hume Freeway is a major step forward for the BIFT, which brings huge benefits for Mitchell Shire, Victoria and Australia.”