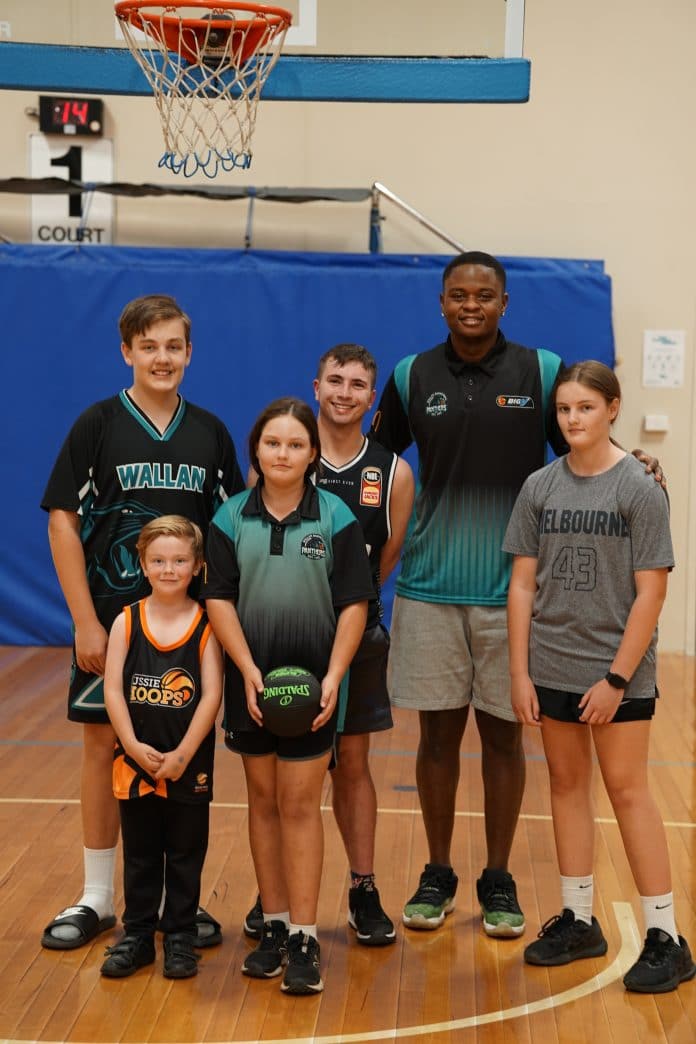 IT is safe to say the Wallan Panthers men’s Big V basketball team will never forget the day their newest American import Arcaim Lallemand arrived.Lallemand touched down in Australia on Monday last week after more than 50 gruelling hours in transit because mechanical issues with his aeroplane in Miami prevented him from catching a connecting flight.

Making a good first impression was important to Lallemand, so despite having barely slept in nearly three days, he went to his first training session with Wallan that evening.

“I was feeling a little iffy but I didn’t want to say anything,” he said.

“[Panthers coach Tim Annett] ran through about six plays for me and he was like ‘do you understand it all?’ I said ‘yeah, I’ve got it’. He said ‘are you good to go?’ and I said ‘nah, I’ve got to go throw up’.

“It was weird because I never throw up, but I had been travelling for a long time and I was keeping myself up trying to see if I could trick my body into going to sleep at the right time here.

“Sure enough, at 5am I was wide awake because it was 2pm back in Miami. I had to learn the hard way that jet lag is a real thing.”

But while Lallemand’s first training session was a memorable one, it is his subsequent actions that have stood out most to Wallan Basketball officials.

Connors said the children naturally gravitated to Lallemand’s soft-spoken nature and his enthusiasm for the game.

With record numbers of junior players enrolled for the upcoming domestic season, she said it was a sign of a bright future.

“This is our 40th anniversary year as a club and we’re keen to make this year special. Arcaim will definitely be a big part of that,” she said.

“It’s so important for us because we are a family-based club that we have someone like Arcaim who embodies that in everything he does.

“There’s a real hunger for basketball in this area at the moment, and I’m confident that Arcaim is going to be very busy while he’s here. There won’t be a lot of down time for him.”

After studying health and wellness at Eastern New Mexico University in the United States, Lallemand worked with more than 600 children across the all-abilities spectrum as a member of the Special Olympics.

He said the experience reaffirmed his passion for mentoring young people and he was excited to take up a similar role in Wallan.

He said the Panthers coaching staff made it clear they valued his character as much as his on-court talent when signing him.

“It’s been a blessing to do all that because it kept me well rounded. It reinforced the fact that I loved basketball and wanted to come back to basketball, but it also showed me what I’m able to do on the other end,” he said.

“A lot of this isn’t just about your skill. It’s great that you’re great at basketball, but you’re also surrounded by great people and it has to rub off the right way.

“I had a bunch of meetings with [Wallan] to be able to show them my character as well as my game.”

On the court, Lallemand comes with an impressive resume.

Standing nearly two metres tall with an imposing 211-centimetre wingspan, he can play forward or centre and brings versatility on the defensive end of the court.

During his four years at Eastern New Mexico University, he faced elite competition, including a match-up with future NBA first-overall draft pick Deandre Ayton and his former University of Arizona team.

Lallemand’s addition to the Panthers changes the makeup of the team, which featured an offense built around Black’s play at point guard last season.

With plenty of guards remaining on the roster, Lallemand said he would contribute in multiple ways without dominating the ball, doing the dirty work like setting screens, playing tough defence and gathering rebounds.

“Something I love and I try to help the younger kids understand is that a great screen can get you and the other guy open, and it makes everybody else move,” he said.

“I can score from midrange … [and] I’ll definitely do some back-to-the-basket stuff as well. I’ll try to put some guys under the rim and bury them, but I can hit the three as well.

“I’m so good at moving off the ball that if I can get it to the guys that know how to handle it, it saves me energy and lets them do what they do best. I know I can trust these guys to knock down their shots, so I wouldn’t be surprised if I get a triple double here and there.

“For me it will be more about reinforcing the team on the defensive end.”

After COVID-19 lockdowns prematurely ended the previous Big V season, and with it a promising Wallan campaign,

Lallemand said the team’s goal was to claim the division two men’s championship this season.

“When I went into the store room I saw a jersey from the 2020 [Country Basketball League] championship, and I thought ‘how nice would it be to have one of those for this year?’” he said.

“We each had individual meetings during practice. The first thing Tim asked was what our personal goals were, and I said to win with the team.

“We’re holding ourselves accountable to be a top four team and that’ll put us in the right position as we go on.”

While Lallemand has made a great first impression in Wallan, he said his own impressions of Australia had been equally positive, giving him the boost he needed after a hard journey.

“My flight got into Sydney at 6am and I was rushing through the airport because I had my connection to Melbourne, and there were like 200 people in the airport waving, screaming and yelling. I had no clue we were the first international flight in after all of the [COVID-19 travel] changes had been made,” he said.

“I was sweaty and confused, and there was a camera in my face. A reporter asked me ‘how does it feel to be back in Australia’ and I’m like ‘this is my first time!’

“They gave me Tim Tams and stuffed animals, and I thought ‘oh my goodness, this is what Australia is like?’”

Lallemand said he already felt a strong connection with the Wallan community and looked forward to continuing to get to know his new home.

“It’s funny because rushing through the airport, there were people asking what brought me here. Of course it was basketball, but when they asked what I was most excited about, I said ‘truthfully, the people’,” he said.

“I’ve walked through the shopping centre and I’ve had people ask me ‘are you excited to be in Wallan? Are you comfortable here? Do you have any questions?’

“In the States you could be a new face somewhere and a lot of people would just walk right by you, whereas here a lot of people are going out of their way to shake my hand.

“I love it out here and the people are awesome. I’m just excited to be here and be part of the family.”

Wallan Panthers kick off their Big V season on March 19.