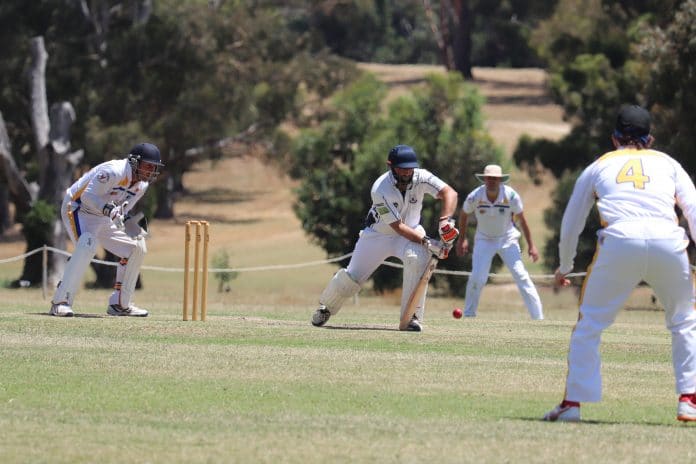 A SLEEPING giant of the Seymour District Cricket Association’s A Grade competition may have awoken at the weekend when Kilmore defeated previously unbeaten ladder leader Eastern Hill.

Kilmore had struggled after finishing runner up in 2020-21, winning only two matches in the first seven rounds.

But against Eastern Hill, which trounced the Blues in an eight-wicket round three win, Kilmore finally found its best form.

Winning the toss, the Blues elected to bat first and were repaid with a knock of 91 by opening batsman Dale Tassone.

It was the veteran’s best innings of the season and set up a team total of 6/176 from 45 overs.

Tassone was eventually dismissed leg before wicket by Eastern Hill’s Ben Bryant, who narrowly missed out on a hat trick after bowling Robert Hanson for a golden duck and claiming the wicket of Kevin Craddock two balls later.

Despite Bryant’s devastating spell, Ben Dawson, 11 not out, and Mitch Van De Duim, 12 not out, were able to bat the innings out without any further losses.

Buttler said the team felt good about its total.

“Dale is a class batsman and one who is a big part of our batting order. For him to make 91 really set up the innings for us – he was phenomenal,” he said.

“We thought we were around the mark and we had enough on the board, but credit to Eastern Hill though – they fought it out and turned it into a really good game.”

The Eagles refused to lie down despite losing the early wickets of Brayden Speechly, caught for a duck off the bowling of Buttler, Dallas Burgowicz, bowled by Van De Duim for four, and Bryant, bowled by Hanson for 11.

It was the start of what proved to be Hanson’s first five-wicket haul at A Grade level.

“Rob Hanson had his first A Grade five-for, and Mitch Van De Duim bowled really well to set up the innings opening the bowling, so they were definitely the pick of our bowlers,” Buttler said.

Despite the sharp bowling of Hanson and Van De Duim, Eastern Hill captain Seamus Feery made a middle-order 60, giving the Eagles life.

But when Feery was eventually caught off the bowling of Van De Duim, the visitors did not have enough firepower to contend with the Blues, and were bowled out for 155 with only an over remaining.

The win kept Kilmore in the hunt for a top two finish, and Buttler said it would be a confidence boost for his side.

“We just haven’t clicked for long enough periods throughout the year, and we thought if we could just string it together for a bit longer we were more than capable of beating them. That’s exactly what unfolded,” he said.

“With our side there are a lot of moving parts. We’ve had a few go in and a few go out.

“It’s just about trying to get all those parts to gel, and I thought once we did we could definitely have a tilt at winning a premiership.

“Hopefully this is a sign that things are starting to click for us and we can have a big run at it in the second half of the season.”

The ‘Rook batted first after winning the toss, with Leigh Irving’s 70 anchoring an innings of 7/193.

Cam Muir, 20, skipper Lachie Watts, 21, Shane Topham, 26, and Corey Jones, 27 not out, also made handy contributions to the total.

Yea failed to muster a strong reply, with opener Cam Armstrong, 31, and Andrew Butterworth, 53, the only Tigers to make significant tallies as the team was bowled out for 129 in the 42nd over.

Nine Tallarook players bowled at least an over, with Ian Whiteman, 3/7 from three overs, and Muir, 3/10 from 2.1 finishing with the best figures.

The final match of the round between Seymour and Broadford was washed out.
This weekend will see Broadford host Kilmore, Eastern Hill travel to take on Tallarook and Seymour at home against Yea Tigers at Chittick Park.

Romsey cricket left with work to do