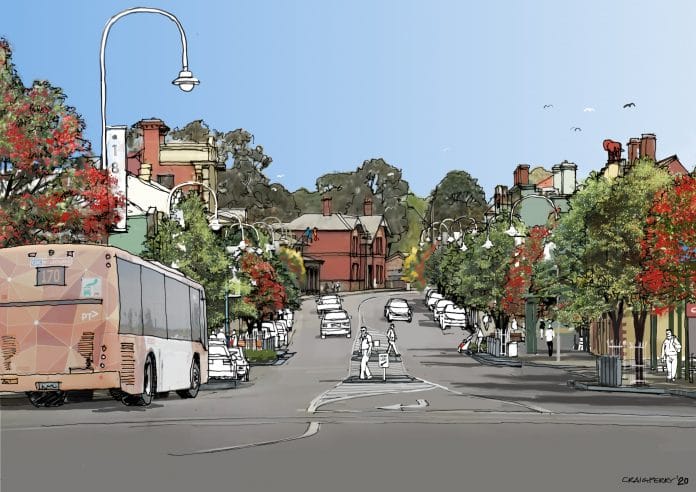 A GROUP of Kilmore property owners have vowed not to develop or spend money on any of their properties unless Mitchell Shire Council abandons its Sydney Street rejuvenation plans.

Sydney Street will also receive pedestrian islands, and heritage signage and branding including street banners under the project.

A group of Kilmore property owners have expressed concerns about the project, including The Kilmore International School founder Ray Wittmer and former real estate agent and developer Alan Wilson.

Mr Wilson said he, Mr Wittmer and two other property owners who declined to be named had decided not to spend money on any of their main street properties in a protest against council’s plans.

“Between the four of us we own nearly four acres of main street property,” Mr Wilson said.

“The four of us have decided as a result of this crazy rejuvenation plan … that none of us are going to do any development on any of our properties ever.

“That means it doesn’t matter how much they rejuvenate that road. All the employees, all the builders, all the workers – all that [development] activity creates life in an area, and we’re not going to spend [to create] that.”

Mr Wilson, whose proposal for a food truck park development on Sydney Street was rejected by council in 2019, estimated council had knocked back between $25 and $30 million of potential development between the four owners.

“The public can say, ‘well that’s their loss’ but it’s actually the public’s loss because you need people like us who will do this,” he said.

“If we don’t do anything for five, 10 or 20 years, sure, it’s our loss, but how does Kilmore create any new activity there if we’re not spending any money?”

Mr Wittmer said he believed there was no point investing money into his properties if the rejuvenation project went ahead.

“The reality is that we’re not going to make a decision that is commercial suicide,” he said.

“I’ve got no intention of developing while we’ve got this lunatic behaviour of [council] saying ‘this is a historic precinct, so let’s do nothing’.

“Why would anybody do development when everything is screaming out that this plan is not going to work?”

When asked if the owners’ refusal to develop properties amounted to them holding Kilmore to ransom, Mr Wilson disagreed.

“For people who don’t invest and don’t spend money, I think that’s an obvious thing that they might see, but it’s not that,” Mr Wilson said.

“My view is that I can’t afford to spend the money on a development if the customers can’t access it. If I was to try to sell that to an investor, they would turn around and tell me I’m nuts.

“By refusing to work together and just telling us no, Mitchell Shire is holding us to ransom.

“None of this rejuvenation is rejuvenating any of the properties, and they’re certainly not working with developers.

“They never had a meeting with us about it. They ran [community consultation] from July until mid-August. They never invited us to have any input.”

Mr Wilson said with all of his properties fully occupied with paying tenants, he had no incentive to sell his properties or invest more money into them.

“[Council has] gone out and behaved poorly towards people who genuinely love Kilmore and want to create something wonderful and new,” he said.

“Whether the way we wanted to develop it was right or wrong, we all, including me, had our hearts in the right place. We all wanted the very best.

Council chief executive Brett Luxford said council was committed to the Sydney Street rejuvenation plans and would not back down.

“The Sydney Street Revitalisation project was initially identified as part of the Kilmore Structure Plan and Town Centre Plan prepared in 2017,” he said.

“Off the back of this important strategic work, council secured funds from the State Government to improve the look and appearance of the main street.

“Sydney Street has not seen any significant improvements for decades and it is important that it be improved to facilitate a better quality main street environment throughout the town centre.

“Council stands as a willing partner to facilitate well planned, designed and executed proposals that improve the Kilmore township.”