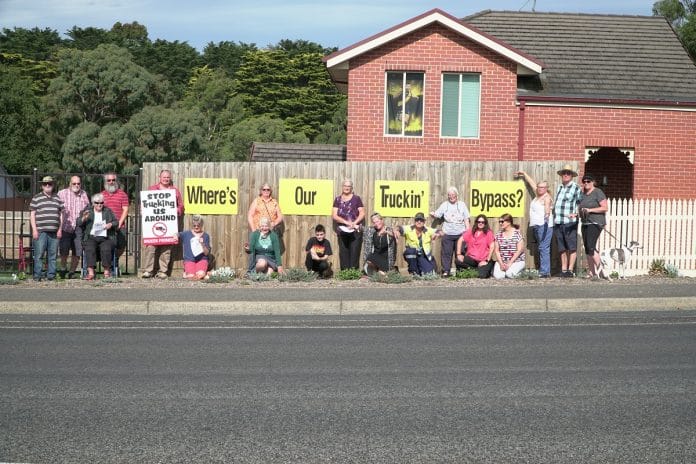 WITH the state election less than a year away, Mitchell Shire councillors have resolved to redouble advocacy efforts to progress the Kilmore bypass project.

At council’s November meeting, councillors noted the lack of progress on the bypass project during the past four years, despite the project being ‘shovel-ready’.

Cr Annie Goble moved that council develop ‘a rigorous advocacy approach … to further advance the project over the next 12 to 18 months’ – dovetailing with the lead-up to and aftermath of the state election.

“The State Government made an announcement in 2017, and since then in the big-picture stuff, very little has happened,” she said.

“The State Government has committed piddling amounts of funding for the planning of and land acquisition for the bypass. However, sufficient money to complete the purchase and construct the bypass are yet to be committed.

“This needs to be done immediately for the safety and amenity of the community of Kilmore, and for the truck drivers to give them a safe, predictable and ultimately faster path north of Kilmore.”

The State Government committed $12 million in November 2020 for the construction of a roundabout at the intersection of the Northern Highway and Wandong Road, which would serve as an entry point to the bypass.

No construction has been undertaken since the funding announcement, and the northern alignment of the bypass route is yet to be finalised.

In April this year Member for Northern Victoria Jaclyn Symes said Regional Roads Victoria was in the process of preparing planning approvals for the roundabout project.

Cr Nathan Clark said it was frustrating to watch heavy traffic move through the centre of Kilmore carrying materials for other infrastructure projects across the Victoria.

“Watching the infrastructure that goes into building the level crossings and giant rail bridges in Melbourne on gigantic trucks that cart huge spans right through the middle of Kilmore, disrupting traffic and the lives of people living there – they could drive around the town if there was a bypass,” he said.

“This is shovel-ready. We’ve been ready to go for too many years now – since before I moved here.”

Cr Fiona Stevens said she understood the frustration of Mitchell Shire residents, but it was often misdirected at council instead of the State Government and Regional Roads Victoria.

“We can’t do it without the community. They have to come on board with us – not misdirect their frustrations towards us, but stand beside us in advocating for this,” she said.

“Kilmore is suffering. We’re trying to beautify the street, bring businesses into the street and spruce Kilmore up, but there will always be a bad taste in our mouths until this bypass goes through.”

Cr Louise Bannister said the councillors were themselves frustrated.

“I think if we wouldn’t get done for trespassing we’d all go out there now and start digging it and putting it in ourselves,” she said.

Wallan’s Avenue of Honour wins grant for upgrades and 53 new...