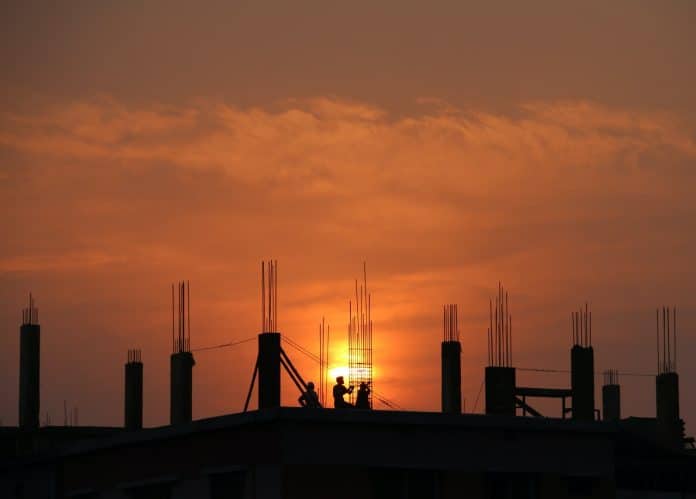 CONSTRUCTION workers living in the Mitchell Shire are without work due to a combination of local lockdown – extended indefinitely – and tightened rules for the industry.

From September 18, the State Government introduced a slew of restrictions for construction workers in metropolitan and regional Victoria, including restricted travel between the two, tearoom closures, and compulsory COVID-19 vaccines.

The travel restrictions came in response to growing case numbers and non-compliance within the industry, with more than 400 active cases now impacting more than 200 work sites, including one site in Box Hill that was responsible for at least 120 cases.

After workers defied COVID restrictions to protest tearoom closures last Monday, Premier Daniel Andrews announced a forcible closure of most sites across locked down areas, except for urgent or unavoidable repairs to protect health and safety.

Throughout the week Melbourne saw citywide violent protests by groups in high-visibility clothing, reportedly organised and fuelled by members of the far-right anti-vax movement. More than 300 have been arrested, and as of yesterday two protesters have since tested positive for COVID-19, including one in the ICU.

The last fortnight has been ‘terrifying’ for Kilmore-based mechanical plumber Ash Costanzo, who now enters his 20th week without work since the pandemic began.

“I’ve already been impacted by a huge loss of income over the past 18 months [and] the disaster payment doesn’t even cover my mortgage,” Mr Costanzo said.

When the travel restriction was implemented, Mr Costanzo was stood down indefinitely from his foreman role on a site in Melbourne that had previously been allowed to operate at 100 per cent capacity. He’s been given no indication when he might be able to return.

“Because I live regional, even though I’m part of running the project, I’ve been told to pack up and get out,” he said.

A few days later, the construction shutdown saw all sites in the Mitchell Shire shut due to its lockdown, prompting an outcry from local tradespeople.

“I’m terrified for what’s going to happen next, and now [with Mitchell Shire in indefinite lockdown] I thought I might’ve been able to do some local work but that’s out of the question too,” Mr Costanzo said.

Rick Woolcock, owner of Dr Dirt Earthmoving in Kilmore East, says the construction ban should come off for Mitchell to enable local work.

“It impacts everybody,” he said.

“There are houses in the district in their final stages of completion that cannot be finished because of the ban – this leaves many families in limbo.”

One Wandong resident told the Review via social media that her family was due to move into their new home in three weeks, but had now been given no completion or move-in date.

A Mitchell Shire construction business owner who wished to remain anonymous said they expected their sites could sit untouched for weeks, which would impact cash flow already pinched by nationwide material shortages due to global shipping delays.

“You used to be able to do a job in a pretty predicable time period, that now has gone out the window,” they said.

The business owner, who is part-way through 12 contracts in the shire, said they were struggling to keep the business afloat.

“I don’t have the answers, all I know is it’s very, very hard at the moment – you feel like you’re getting knocked from one pillar to the next. I’m sure I’ll get through it, but I know there’s a lot that won’t.”

“When you don’t have a dedicated admin team … we’re on site working, then getting home, trying to spend time with our families and trying to work out whether we’re legally allowed to work.”

“Between our five jobs we’re mid-stage payment on three, so we’ll get to the end of this month, if we’re still in lockdown, and have to pay all our suppliers and trades but not be able to invoice the client or the bank because we haven’t hit our stage targets.”

Mr Carpenter said he and the industry as a whole were warned about the government’s compliance blitz in early September, as industry transmission increased. He said he made sure his staff were following mask and QR check-in rules, but has still be impacted.

The two-week shutdown is estimated to cost the statewide industry as much as $2 billion.