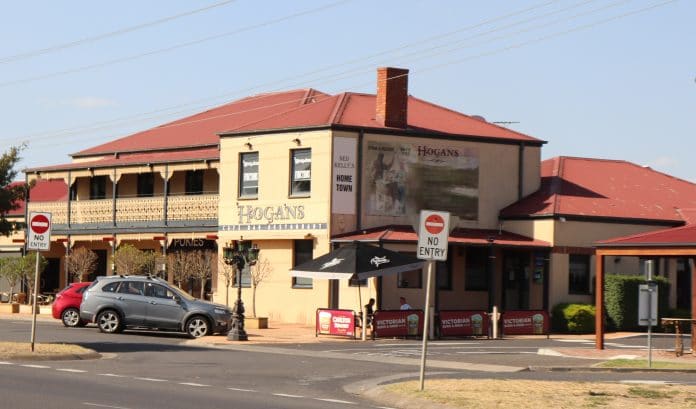 Many hospitality businesses across the Mitchell and Macedon Ranges shires have decided to remain closed to diners despite the lifting of lockdown in regional Victoria on Friday.

Tighter restrictions are in place for hospitality than previous post-lockdown periods – a maximum of 10 diners are now permitted inside and 20 outside, regardless of venue floor-space.

“When it was announced I think everyone was bit excited but in the fine print you can only have 10 people inside the whole building, which for us, there’s just no point,” Hogan’s manager Darren Freestone said.

Mr Freestone said when the previous cap was 100 at any one time, subject to density limits of one per four square metres, the hotel was able to trade and cover its costs, but having a flat number so low for all businesses was disappointing.

“It’s a step in the right direction opening but [we’re] pretty disappointed,” he said.

“Thanks but no thanks, we just can’t trade.”

Owner of Soltan Pepper in Romsey Mel Soltan said no prior notice for industry workers and a lack of detail in press announcements meant more responsibility fell to the businesses.

“Most people don’t read the fine print, they just presume that the restaurants will know all the answers and will give them all the information,” she said.

“Not only have they not let you open but they’re also giving you the dirty work of telling people why we can’t open.

“It makes for really bad word of mouth because it’s like we’re not trying hard enough to be open.”

When the new restrictions were announced, she similarly decided it wouldn’t make sense to open the 100-capacity restaurant for just 10 diners per sitting, but backflipped at the last minute to open for dinner on Saturday to give the community the opportunity to socialise.

“If we can actually make it work maybe we’ll just do it on Saturdays, but we’ve already got people trying to book for next week,” Ms Soltan said.

Last time she said she knew they would run at a loss when the patron cap was 20 indoors, but ultimately opened after pressure from customers.

“I did the figures, but then I started to doubt myself and we ended up opening because people were getting frustrated and angry with us for not trying to be open, but it wasn’t worth it – 50 per cent of the time we were running at a loss, so how long do you wear that for?,” she said.

Member for Northern Victoria Wendy Lovell said in Parliament last week that the State Government had failed to consider the impacts the patron limits would have on hospitality.

“The new rules are so restrictive regarding patron numbers that many businesses will lose money if they open, and the government needs to reconsider these ridiculous density limits to give Victorian businesses a decent chance to start their economic recovery,” she said.

Member for Euroa Steph Ryan also said the low cap numbers would hurt hospitality businesses that had already created and followed COVIDSafe plans for more than a year.

“Allowing a maximum of up to 30 patrons is a fraction of the capacity of many venues that would normally seat hundreds of diners at any given time,” she said.

“This is not a plan to reopen. It’s a cruel blow to regional hospitality businesses who hoped they would be seeing some light at the end of the tunnel.”

An easing of restrictions is flagged for Melbourne when Victoria reaches 70 per cent first dose vaccinations, but with a growing list of regional exposure sites, including in Daylesford, Woodend and Carlsruhe, it is unclear when restrictions around hospitality in regional Victoria will ease.