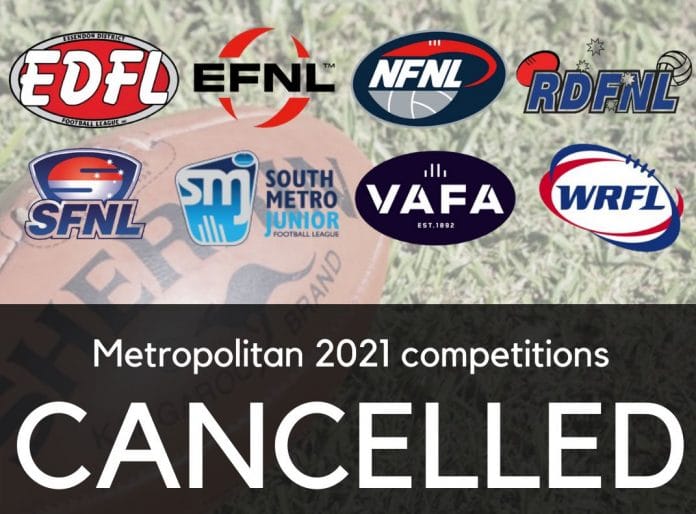 They join several other metropolitan based leagues in issuing a joint statement this morning, saying the decision was due to the State Government’s announcement of an extension of the current lockdown in metropolitan Melbourne until at least September 23.

The cancellation of all competitions for the 2021 season does not apply to Auskick. AFL Victoria will provide an update on Auskick in due course.

In their statement, the leagues said the decision was an extremely difficult one and had not been made lightly.

“All leagues have been working diligently in the hope of enabling the remaining games in the 2021 season to be played.

“However, it is now apparent this will not be possible in the current environment.

“All leagues are committed to working closely with their member clubs, AFL Victoria and Netball Victoria to manage the associated issues related to the cancellation of all 2021 competitions and working towards a return to play next season.

“We wish to take this opportunity to thank all clubs, players, parents, volunteers, officials, umpires and league partners for your patience, support and cooperation throughout the 2021 season.”

The leagues urged all associated with respective communities to heed the advice and regulations in place by order of the State Government.

“We all have a role to play in ensuring our community remains safe and healthy so we can all return to football and netball next season.

“Further updates regarding the operational aspects of this decision will be provided in due course via each respective league.

“All leagues look forward to returning to competition bigger and better in 2022, commencing the weekend of April 1-3.”

Riddell District Football Netball League general manager Jordan Doyle said thanked everyone involved in the RDFNL for their tireless work to keep the season going in 2021.

‘Unfortunately, after weeks and months of competition changes and plans being altered, yesterday’s state government announcement regarding another lockdown extension has meant our football and netball seasons are over for 2021,” he said.

“We are already looking forward to our competitions starting in April 2022 for hopefully an uninterrupted season.”

Redbacks close in on minor premiership