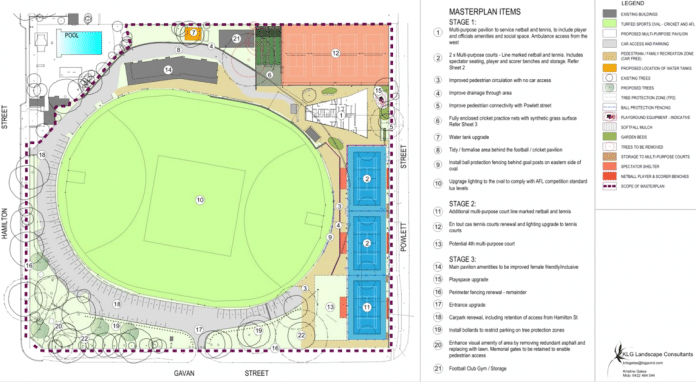 A MASTERPLAN for Broadford’s Harley Hammond Reserve is now open for public comment after Mitchell Shire councillors opted to let the community have its say.

The plan recognises a need to improve and modernise many of the reserve’s facilities in keeping with its status as Broadford’s premier sporting precinct.

The reserve serves as a hub for several sports including tennis, netball, cricket and football.

The plan references a new tennis and netball pavilion, currently under construction, which council hopes will address the needs of both sports in what has become a constrained space.

At this month’s ordinary council meeting the plan was due to be approved by councillors, but Cr Fiona Stevens moved an alternate recommendation to put it out as a draft for public consultation.

Cr Stevens said the plan was developed in consultation with user groups that already occupy the reserve, but she wanted to let the wider community have its say.

“I believe to be open and transparent and to make sure we give the opportunity of inclusion, we should not vote on this particular masterplan without the broader community getting an opportunity to see it and to have input and suggestions if there are any out there,” she said.

“I think that is our responsibility as representatives of the community – to make sure everyone who has a connection to this facility has an opportunity to see what’s being proposed and have input if required.

“Apart from the main user groups that were consulted, there are others we haven’t yet captured.”

Council has contributed more than $3.7 million for improvements at the reserve in recent years, with an additional $690,000 from Sport Recreation Victoria, $50,000 from Cricket Australia and $13,000 from Harley Hammond Reserve Committee of Management.

Recent works included a rebuild of the reserve’s oval with new irrigation and drainage and the upgrade of oval lighting to football competition standard.

Two other major projects are nearing completion – lighting and reconstruction of two shared-use netball/tennis courts and a new shared-use pavilion for netball, tennis and the broader community.

Work has also started on the relocation and upgrade of the cricket nets and some drainage improvements.

“Broadford is growing and demand for sporting facilities is strong. COVID has stopped many sporting activities, but there is no question that we have a strong future for sport in Broadford thanks to the hard work of the volunteers of our committee of management and clubs,” she said.

Cr Bill Chisholm said the reserve was important to everybody in the Broadford community and therefore everybody should have a say on its future.

“I think it’s really good that these sorts of things do go out for community consultation because Harley Hammond Reserve has residential houses right across the street on two sides and the school on the north side,” he said.

“It’s a really constrained site but a really important site in Broadford.

“The parking and drainage issues are far wider than just Harley Hammond Reserve. Some of those issues emanate from the reserve, but they have a big effect on the wider community.

“To solve some of the parking issues and drainage issues, we should be looking far broader than the actual site.”

People can view the Harley Hammond Reserve draft masterplan and provide feedback at engagingmitchellshire.com/harleyhammondmasterplan. Feedback closes at 9am on September 16.

Councils call for road side assistance