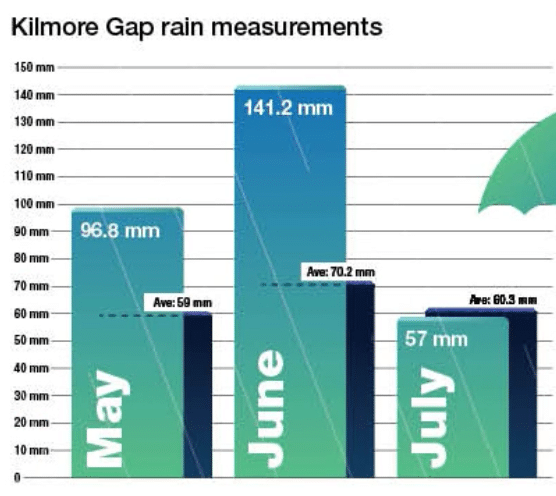 KILMORE East farmer Kevin Butler believes the region is in the midst of its wettest period ‘in 60 years’ after the Bureau of Meteorology’s, BoM, Kilmore Gap weather station recorded more than double the average monthly rainfall for June.

The Kilmore Gap recorded 141.2mm in June – twice the amount as the average of 70.2mm for June.

May was also wetter than usual, recording 96.8mm – higher than the average of 59mm. Rain figures for July were more on trend with 57mm, close to the July average of 60.3mm

Mr Butler said he did not keep personal rainfall measurements but the BoM statistics backed up the conditions he had experienced on his farm.

“I’ve got a rain gauge but I don’t keep measurements, I just tip the water out. But it’s been an exceptionally wet year,” he said.

“It’s so wet that I can’t take vehicles into paddocks. I’ve had to keep to the tops of hills and ridges.

“I’m normally able to check my stock every day, everywhere, but I just can’t do it.

While Mr Butler said the wet weather had made for some challenges on the farm, it was a preferable alternative to a prolonged period of dry weather.

“It’s good, because it fills up the dams. It brings its own challenges, but it’s better that way than the other way around,” he said.

“You don’t forget the drought of 1982-83. We had no rainfall in July and nothing at all in August.

“It was terrible. They were shooting sheep everywhere.”

A BoM spokesperson said a key driver behind higher-than-average rainfall in Australia was the Indian Ocean dipole, IOD, a measure of the surface temperatures in the western and eastern parts of the Indian Ocean.

The spokesperson said the IOD was currently in a negative phase, resulting in warmer-than-average waters in the eastern tropical Indian Ocean and bringing more rain to parts of Australia.

They said the trend of above-average rainfall was likely to continue through spring for eastern Australia.

“A negative Indian Ocean Dipole has established, and large parts of the eastern Indian Ocean are warmer than average,” they said.

“This can favour above-average winter-spring rainfall for parts of Australia.

“Cooling of the tropical Pacific is likely in the coming months, and also may be increasing the chances of above-average spring rainfall for much of eastern and northern Australia.”

The mean temperature of 11.3 degrees recorded at Kilmore Gap during June was more than two degrees higher than the June average of 9.2 degrees.

The BoM spokesperson said recorded temperatures at Kilmore Gap were often lower than those experienced in the Kilmore township due to the weather station’s location on Pretty Sally hill near Wallan at an elevation of 528 metres above sea level.

She said the station was primarily used to record weather for Tullamarine Airport in Melbourne and helped to monitor fog levels.