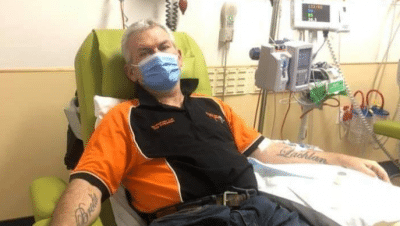 DES Haliday’s love for his wife Leanne and two children, as well as his involvement with various clubs in the community is inspiring him through his battle with cancer.

When the Riddells Creek resident was diagnosed with anaplastic large cell lymphoma, a rare type of non-Hodgkin lymphoma, it was a struggle for him, his family and the other families who knew Mr Haliday.

In an instant, Mr Haliday was forced to pause all his activities to focus on his health.

In April, Mr Haliday began experiencing severe pain in his abdomen. An initial round of tests indicated his lymph nodes were slightly enlarged, but overall, things seemed normal.

The pain worsened, and he spent five days in hospital conducting more tests. A CT scan showed the lymph nodes were a little larger but he was assured there was nothing to worry about, and a colonoscopy and bowel screening ruled out bowel cancer.

He returned to hospital in June where this time he was not allowed to leave until the doctors could determine a diagnosis.

After 14 days, a PET scan showed lots of ‘hotspots’ in Mr Haliday’s body and a biopsy confirmed he had lymphoma.

Mr Haliday has been involved with the local pony club, football club and cricket club, always making sure the children were a priority at each club and were well looked after.

Despite his cancer diagnosis, Mr Haliday has remained positive and said his family and the children involved at the sporting clubs gave him a reason to fight his battle.

“My wife is my saviour and she’s my everything. She works and works to make sure everything is alright,” he said.

“I also learnt 15 years ago that life’s not about me, and that’s when we had children. It’s about my children now.

“The kids mean so much to me; it gives me a purpose, all those kids.

To treat the lymphoma, Mr Haliday is undergoing six cycles of chemotherapy, each 21 days apart. He began his second cycle on August 2.

A friend of the family, Sarah-Jane Wills set up a GoFundMe campaign to help support the costs of Mr Haliday’s treatment.

Ms Wills said Mr Haliday had a tremendous impact on many children and their families through his involvement in the community, including her own children.

“Every child who knows Des knows the impact he has had on them,” Ms Wills said.

“The impact he has had on my kids has been enormous; we first met Des through AusKick about six years ago and he has been the junior footy coach through my son’s life.”

Ms Wills said Mr Haliday was an integral part of the community and always the first to help.

She said it was time for some support to be returned.

“He’s a very loving and outgoing man, he will take the shirt off his back to help someone in need,” Ms Wills said.

“I wanted to set up the GoFundMe campaign because Des and Leanne are really good friends to us, and honestly, I don’t look at them as friends, they are my family.

“The love and care he shows to everyone in the community and every child … I never doubted the page would go well.”

Mr Haliday is aware of the generosity of the community and thanked every person who has in some way helped himself and his family.

“I just want to thank everyone – it’s about the community coming together,” he said.

“It might be a bad place for me to be right now, but Riddells Creek and the community is a great place to be in.”

A hero to treasure