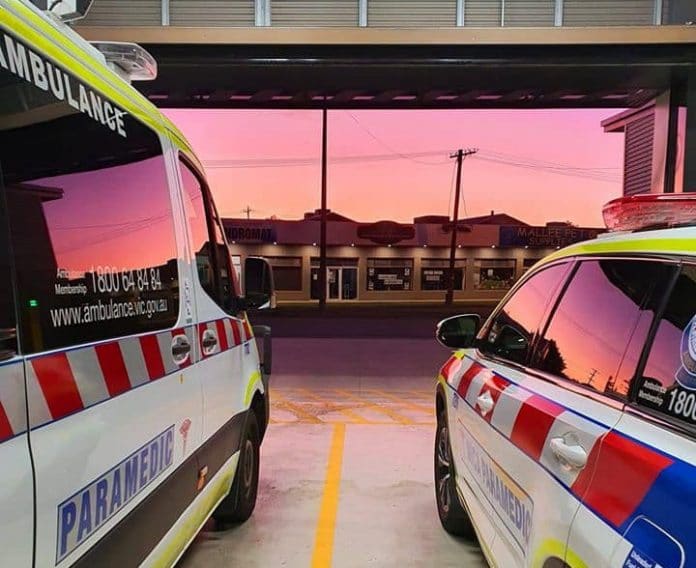 Ambulance Victoria will manage record demand by recruiting more than 300 paramedics and nurses, including 56 on-road paramedics in rural Victoria in the next 12 months, as part of a $759 million State Government investment.

Alternative services that free up ambulances for emergencies, such as secondary triage and telehealth mental health services, will also be expanded, and a new medium acuity transport service will be established, supported by 22 vehicles and 165 staff to provide care for less time-critical patients.

Paramedics attended 84,441 time-critical cases between April and June this year, the highest demand on record for this time of year, and the second highest quarterly result in Victoria’s history.

The latest performance data revealed a 29 per cent increase in code one cases over the past four years.

From April to June, paramedics attended 73.1 per cent of code one cases within 15 minutes, but Ambulance Victoria chief executive Tony Walker said the latest performance data paints a clear picture of an entire health system under incredible pressure due to the COVID-19 pandemic.

“There’s no denying we are experiencing an extraordinary workload – the highest we’ve ever seen for this time of year,” Mr Walker said.

“From April to June we responded to an extra 3000 code one cases than the previous three months, and this unprecedented increase in workload is being experienced right across the healthcare system.”

Along with the increase in time-critical cases, more than 37,000 calls to triple zero last quarter did not require an emergency response. A further 20,000 patients who received an ambulance did not require transport to hospital.

“This is leading to congestion at hospitals, with lengthening transfer times at emergency departments impacting on our crews being available to respond to the next person in need,” he said.

He said several factors were contributing to the enormous demand this financial year.

“We know that there are tens of thousands of extra Victorians in the state who would otherwise be elsewhere as a result of the pandemic,” he said.

“There are also those with chronic conditions who were reluctant to visit their GP or specialists during lockdown who are now finding themselves more unwell and in need of urgent care.”

“Every call we get that is not an emergency impacts on our ability to get to people in the community who need us the most,” Professor Walker said.

Member for Northern Victoria Tania Maxwell said she had been concerned at the ambulance wait times, which on average increased by two minutes on code one call outs in the Mitchell Shire compared to the same time last year.

“I have spoken numerous times in this Parliament about the pressure on ambulance services in northern Victoria, including a very sad, recent case in my electorate where an aged-care resident waited 90 minutes for an ambulance,” she said.

She said bottlenecks at emergency departments could lead to hospital staff instructing the paramedics to keep caring for the patient in the vehicle until they can be admitted.

Ms Maxwell said the issue needed to be addressed with extended hours and weekend operation at general practices.

“I expect such a prospect would be welcome in many regional centres also, if you could indeed resource them, given the wait time to see a GP,” she said.

The government funding will also be used to bolster Ambulance Victoria’s communications resources and implement demand easing initiatives across the state.

Ambulance Victoria’s Referral Service, which connects triple zero callers who do not need an ambulance with alternative care through secondary triage, will be expanded with the recruitment of 57 extra paramedics and registered nurses.

An extra three staff will also expand the state-wide 24-hour mental health service that connects paramedics with mental health clinicians via telehealth, and 30 staff will be added to both metro and rural communications areas.

“This funding package addresses the challenges we have today related to performance, to workload and demand, and to meeting the ever-more complex needs of the community,” Mr Walker said.

“It does so in the most direct way possible; by enabling our paramedics, clinicians and call centres to do their jobs better, and by providing new resources where they are needed most.”

Professor Walker said while it was great news for the organisation, the challenges it faces were ongoing.

“We also need to be realistic. This is not an overnight fix. The challenges we face are complex, however we have a clear plan and significant state government funding to improve our response performance,” she said.

Animal kindness week: How to live and eat more sustainably