Home News Community The memorial they never had: Eight RAAF pilots who died on Mount... 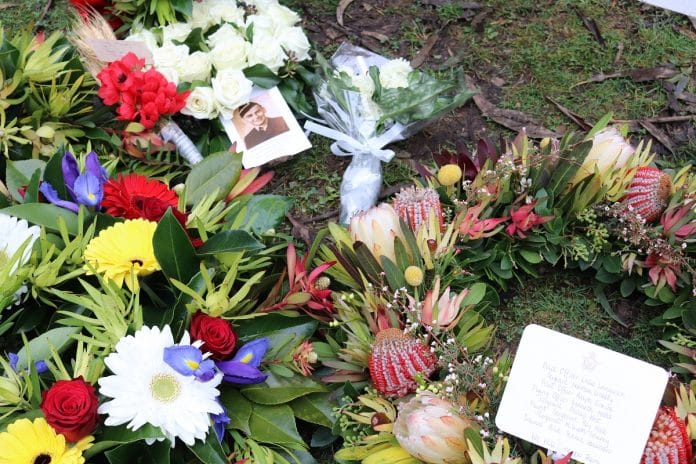 Descendants of Royal Australian Air Force pilots and crew who died in plane crashes on Mount Disappointment in the 1940s and 50s were last week able to honour their relatives in a memorial service.

Nearly 60 guests including RAAF personnel, the president and vice president of RSL Victoria, and 11 relatives of the airmen who died attended the service at Blair’s Hut at Mount Disappointment, near Heathcote Junction, on Thursday – exactly 79 years to the hour since the first plane crashed on August 5, 1942.

The service was the result of years of investigation by researcher Les Lewis and Trevor Viénet, the self-titled amateur historian behind the Friends of Disappointment Facebook group who lives near the state forest and took an interest in Mr Lewis’ work.

Through organisational and fundraising efforts with Wandong History Group during the past several months, Mr Viénet commissioned a memorial plaque for the site of the first plane crash, which was unveiled at Thursday’s service, coinciding with the 100th year of the RAAF.

“This whole thing is about remembering these men serving their country, and it’s the 100th anniversary of the RAAF so it’s very fitting that we honour these men today,” Mr Viénet said.

“We didn’t go out looking for money from grants, we thought, okay, it’s going to be a community thing. The communities of Wandong [and] Clonbinane dug deep and a few special interest groups as well, so we really thank the communities.”

The plaque lists the names of the eight men, aged between 19 and 32, who died in four separate crashes between 1942 and 1953. The causes of the crashes have largely been attributed to poor weather and visibility.

Three generations of the family of 23-year-old Sergeant Norman Greasley, of Ascot Vale, the sole crew member on the first plane to crash – a Beaufighter Mark IC A19-12 – were present on the day, as well as the niece of pilot officer Leslie Langusch, who piloted the craft when it crashed.

Sgt Greasley’s sister’s four daughters, Robyn Banks, Susan Hampshire, Jo-Anne Glew and Donna Anderson, came from Melbourne and Geelong with their children and grandchildren, and said they felt humbled and lucky to honour their uncle who died when their mother was 10 years old.

Ms Banks said although she knew a lot about her uncle, she never knew the details of his death or that other RAAF planes had crashed under similar circumstances.

“We’d always known the story from mum, and mum always had Normie’s photograph, but I found it humbling actually to find that Norman wasn’t the only one who died. So it’s really nice that all of those young men are being remembered,” Ms Banks said.

The family only found out about the plaque and the service by chance via social media.

Their mother died in September last year and Ms Hampshire explained that since her death they had recently found letters between their mother and uncle, written while he was serving during World War Two.

“We always knew about him; there was always a photo of him, [our mother] talked about him a lot but when mum died in September last year we got possession of letters and more photos, so that brought it home all together,” she said.

It was then that Ms Hampshire started researching the crash and came across Mr Viénet’s fundraising campaign.

“There was this plea, ‘relations come forward because we’re thinking of doing a memorial,’ and I’m thinking, oh my God, something was pointing me in that direction.”

Ms Anderson said they were all grateful to Mr Lewis and Mr Viénet for putting in the effort to honour their uncle and the seven other airmen who died on the mountain.

“It’s quite amazing when you think that people who are not related to any of these men have done such a lot of work. It says a lot about the respect people have for servicemen,” she said.

During the service, emceed by vice president of RSL Victoria and Broadford resident Des Callaghan, squadron leader Ashley Matic spoke on behalf of the RAAF to formally honour the men, which he said was a privilege.

“When we consider the beginnings of the air force 100 years ago, we might reflect on just how far the air force has evolved, but we might also note the core of the service remains the same: the force, professionalism and dedicated service of its personnel,” he said.

“It would have been the same ideals of the crews we commemorate today would have carried with them.”

Guests and dignitaries were then asked to lay wreaths, which were then carried two kilometres uphill to be laid at the newly installed plaque, which was unveiled and dedicated by Mr Matic.

Mr Lewis delivered the closing address, which concluded his almost 22 years of research into the eight deaths.

“We hope that this plaque and service today helps relatives in closure of the loss of their loved ones – remembered and never forgotten,” he said.