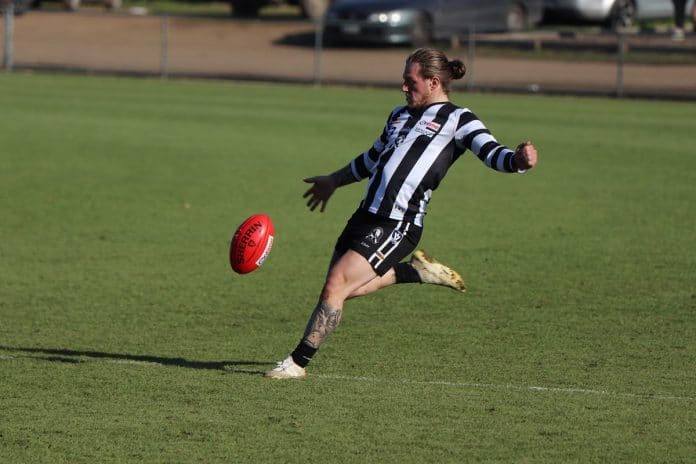 IT was a tale of two halves at Wallan’s Greenhill Reserve on Saturday as the Magpies shook off a dogged first-half challenge from Lancefield to win 20.16 (136) to 3.3 (21) in round 10 of Riddell League football.

The Tigers had shown signs of improvement after a difficult start to the season, finishing only 20 points adrift of top-three side Riddell in round nine and trailing ladder-leading Wallan by just seven points at half time.

But an ankle injury to Lancefield centre half-back Lukas Fellows and some tactical adjustments by Wallan coach Daniel Nolan in the second half turned what had been an arm wrestle into a black and white procession.

Magpie Corey Grindlay dominated the contest after the long break to finish with nine goals, while players like Shaun Stewart were able to work their way into the game.

Full forward Matt Perri was a solid foil for Grindlay with five goals of his own, while Nathan Fowler and Jesse Davies were also prominent.

Tiger midfielder Joe Falcone played arguably his best game of the season, with support from the likes of Tom Keaney and Harrison Taylor, but was powerless to stop the Wallan onslaught.

Lancefield coach Tom Waters said Fellows’ injury, as well as a lack of depth and fitness, had contributed to the second-half blowout.

“[Fellows] is good at dropping off his man and filling the hole and taking a lot of intercept marks for us, so it left us vulnerable when he went down.

“When they kicked it into our forward line, we had nobody to drift across and fill that role, and it really opened us up.”

Waters said the first half had been a positive sign the Tigers were capable of competing with the league’s best sides, but the second half had shown his charges how far they still had to go.

He said his post-game message to the players was about the hard work needed to emulate a side like Wallan.

“They’re the best team – they’re the benchmark by a long way and miles ahead of anyone else,” he said.

“To be able to match it with them for a half proves that we can do it, but what happened in the second half shows that our fitness is lacking and we’re not training hard enough and getting enough work done.

“They’ve got guys in the reserves pushing up and fighting to be the 22nd player every week, and we just don’t have that depth. That’s a big part of the difference.

“Everyone has seen the improvement from where we’ve come from to where we are, but I think now we’re starting to understand that it’s going to take a lot more. There’s a lot of work you have to do to get to the level that a team like Wallan is at.”

Lancefield will look to apply those lessons when it hosts arch-rival Romsey this weekend, after the Redbacks broke a two-game losing streak with a 19.15 (129) to 9.3 (57) win against Melton Centrals on Saturday.

Wallan will be on the road in a match against Riddell.