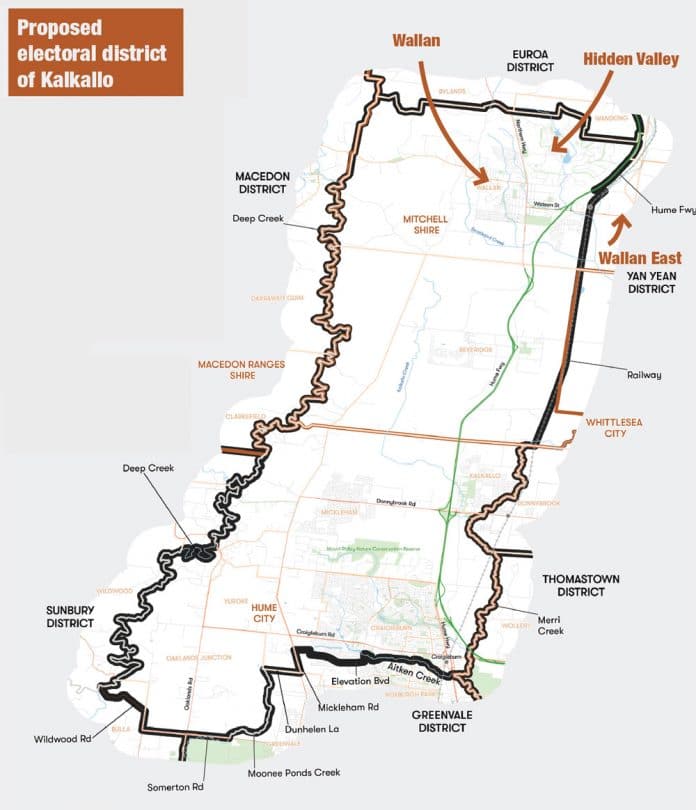 Proposed changes to Victoria’s electoral boundaries would move Wallan out of the Yan Yean electorate and from a regional to metropolitan Melbourne upper house seat as of the next state election in 2022.

If the proposed electoral changes are adopted, Wallan would move from Yan Yean to a new electorate called Kalkallo, which takes in Beveridge, Craigieburn and the surrounding northern fringe of Melbourne.

It would also move from the regional upper house seat of Northern Victoria into the Northern Metropolitan region.

However, Wallan East would remain in the Yan Yean electorate and Northern Victoria.

At the upper house level, Labor’s Member for Northern Victoria Jaclyn Symes would no longer represent Wallan despite her office currently being located there.

In the lower house, only the eastern fringe of Wallan would continue to be represented by Danielle Green, another Labor Party member.

Labor MP Ros Spence’s electorate of Yuroke would also dissolve and largely be replaced by the Kalkallo seat, but Ms Spence declined to comment until the changes were finalised.

Ms Symes confirmed she intended to run in the next election, but said the proposed electoral boundary changes were disappointing.

She declined to comment on whether her office would move out of Wallan.

“I’m disappointed the proposed boundaries don’t include Wallan in Northern Victoria – a community I’ve been proud to serve for the last six years,” she said.

“I want to reassure the Wallan community that a Labor government will continue to deliver for them, no matter who their future elected MPs may be.”

Under the changes Wandong and Heathcote Junction would also be affected, moving from the Euroa electorate, led by deputy Nationals Party leader Steph Ryan, to Ms Green’s Yan Yean electorate.

“I’m a little bit sad that they have recommended taking Wandong out of my electorate,” Ms Ryan said.

“I’ve built some really great relationships with the community in Wandong and I feel like I have unfinished business there, so I’m a bit disappointed.

“Even if that does go ahead, I will continue to work hard for the people of Wandong right up until election day.”

Ms Ryan said the changes to Euroa were minimal, and that she was hopeful for a win when she stood in the next state election.

“I think the changes will make it easier for us to reclaim the Northern Victorian seat that we lost at the last election,” she said.

Ms Green said she was excited to build on her existing relationships in Wandong should she retain her seat in 2022.

“I’ve always put people in my community first and I’ll continue to put my community of Yan Yean first until the election, but I’ll also take a greater interest in the new areas,” she said.

She said adding a new electorate to the rapidly growing Wallan area was a win for residents.

“There are six [Mitchell Shire] councillors that now, in whole or in part, represent Wallan, and I think two lower house MPs that have an interest in Wallan – two’s better than one,” she said.

It would be Ms Green’s third electoral boundary shift during her tenure. Victoria’s Electoral Boundaries Commission conducts realignments every two elections for both houses of state parliament to ensure each vote has an equal value and each elector is represented equally.

Electoral commissioner Warwick Gately called for Victorians to have their say.

“The EBC in December 2020 invited submissions from the public, and received 58 submissions – five from political parties, 15 from organisations and community groups and 38 from individuals,” Mr Gately said.

“Anyone interested in providing comment on the proposed boundaries should lodge a written submission before 5pm Friday, July 30.”

The commission will prepare final boundaries by late October, which will take effect at the 2022 state election.

Submissions can be made and proposed electoral maps can be viewed at www.ebc.vic.gov.au/CurrentRedivision/ProposedBoundaries/Maps.html.

Looking for the next leaders