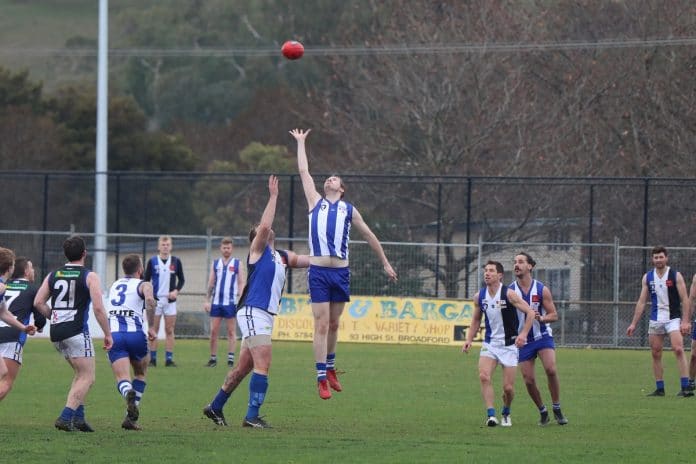 DESPITE another loss for Broadford seniors over the weekend, this time at the hands of Warburton Millgrove, coach Russell Humphrey says it was ‘excellent’ to see how much better the side has performed as a team.

The Kangaroos went down to the Burras 15 to 89, but promising signs from the side including maintaining possession of the ball and working as a team were evident to Humphrey.

“What we were doing is holding more possession… if you look at the stats, we didn’t have 100 to 200 less possessions of the ball, we were better at holding it,” Humphrey said.

“[Overall], we’ve definitely been playing better and shown a lot of improvement.”

The players agree with Humphrey’s acknowledgement of the improvement, with the coach noting they were also feeling that better things were coming their way.

“The players are on board. They are feeling things getting a bit better,” Humphrey said.

“Their attitude right through has been really good, and we all acknowledge the natural improvement, not only as individuals, but as a team.”

Humphrey particularly commended the work of the ‘back seven’ for their impressive efforts in keeping the Burras to the score they achieved.

At the side’s last meeting, Broadford conceded 177 points to its 33.

Across the season, keeping the Burras to 89 points was Broadford’s lowest score conceded.

“Harley Austin, Neil Johnson and Sean Duggan were outstanding… Neil usually plays forward, but he has spent most his life playing back so we chucked him down there and he’s played his best two games [in that position],” Humphrey said.

But it’s across the other side of the oval where lies the Kangaroos’ next challenge – consistency in front of goal.

Broadford were kept to two goals, three points on Saturday, its second lowest score for the season, however it was the work of defence that ensured the Kangaroos weren’t handed another blowout defeat.

“We’re just not seeing it on the scoreboard for that back seven,” Humphrey said.

“Our entries inside 50 were probably a bit short… a bit shallow, and when we did have opportunities, we’d always seem to miss everything or kick a point.”

Staying true to what the side has done all year, Humphrey said training procedures wouldn’t necessarily change, but the Kangaroos would continue to work on their skills, and ‘just keep working on what [they’re] working on’.

“We’ve done the same all year and we are slowly seeing the results from it now,” Humphrey said.

“At the end of the day, we just want to be competitive and be closer in results.”

Broadford’s next challenge is an away game to Yarra Glen on Saturday.