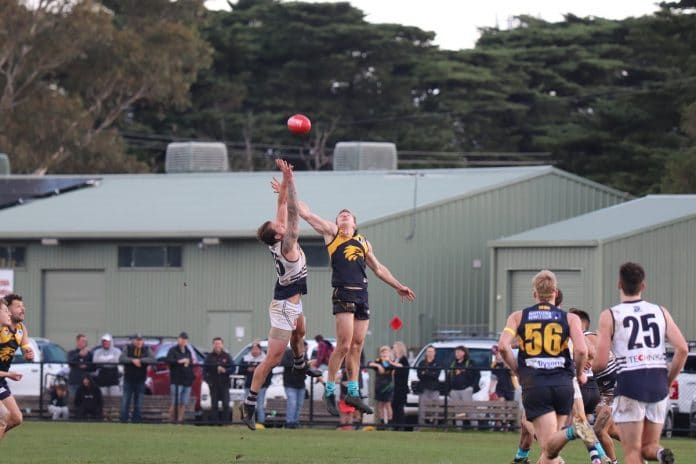 WHITTLESEA football coach Blair Harvey has challenged his side to put more wins on the board in the second half of the Northern Football Netball League season after another hard-fought but ultimately fruitless effort against Bundoora on Saturday.

The Eagles are 1-8 so far this season, but have often played better than their record suggests.

Whittlesea booted 1.5 to Bundoora’s 2.1 in the first term, squandering some easy opportunities.

“It would have been nice to be able to put a bit of scoreboard pressure on, but it wasn’t to be unfortunately,” Harvey said.

“At one stage in the last quarter it was only 13 points the difference and we had a little bit of momentum.

“Unfortunately they kicked a couple of goals, which took our momentum away. Missed opportunities in front of goal definitely cost us the game, there’s no doubt about it.”

Harvey said there was still plenty to like about the performance, which represented a vast improvement on a 78-point loss to the Bulls in a meeting earlier this season.

“It was great for Zach to square the ledger up and hold him goalless,” Harvey said.

“Blake Watson was fantastic again, and he’s been great all year. He kicked three goals and had 30-odd possessions playing in the midfield.”

Harvey said the Eagles were in for a testing fortnight with matches against ladder leader West Preston-Lakeside and fourth-placed Greensborough, before a split-round bye.

With as many as six senior players still working their way back from injuries, Harvey said the Eagles would set themselves to win as many games as possible after the split round.

“For us it has been about trying to find a four-quarter effort, and we’ve only been able to do that once against North Heidelberg in the game that we won,” he said.

“When we can’t play 120 minutes of football, sides are getting a hold of us, so that’s our challenge and it has been all year – just having that consistency of playing 120 minutes.

“We don’t want to be here just to make up the numbers, we want to be one of those teams that is knocking on the door of the finals if we’re good enough.

“We’re looking forward to the next seven weeks and we want to prove that we belong in division one.”

In division three, Kilmore continued its march towards a finals berth with a 14.8 (92) to 6.6 (42) win against Heidelberg West.

The Blues bookended the match with five-goals-to-one first and last quarters, with Michael McCulloch playing a standout game against three-time league best and fairest Jarryd Coulson in the ruck and Marcus Webb booting four goals up forward.

Mitch Thompson, Ethan Gorski and Jacson Cecil were among the Power’s best in the win.

Mernda, meanwhile, was no match for ladder leader South Morang, going down 14.12 (96) to 8.10 (58) despite a strong game from Riley Vincent and four goals to Riley Black.