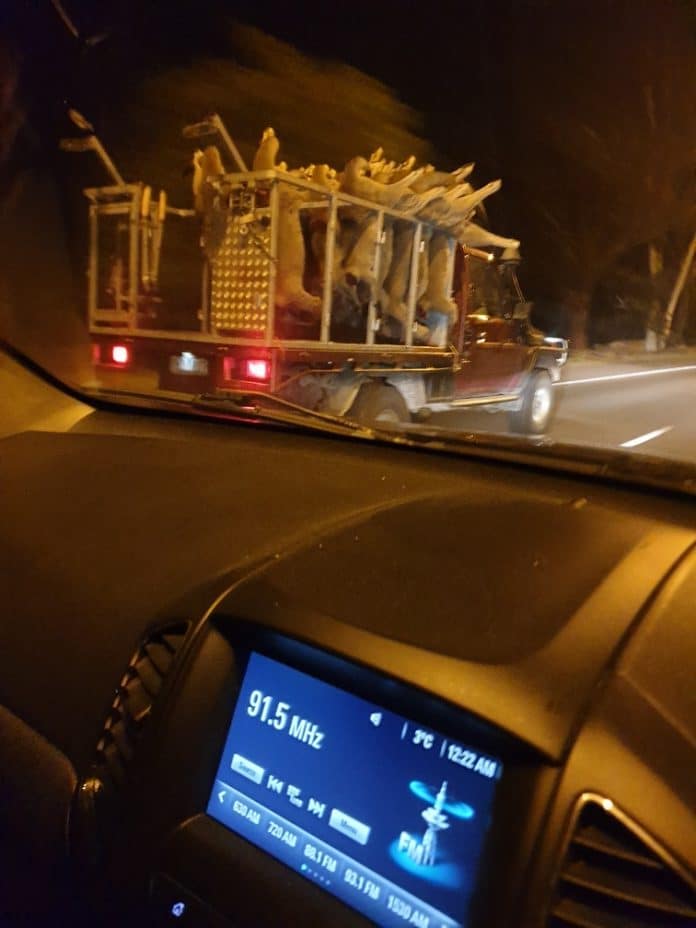 A SEYMOUR woman has questioned Victoria’s standards for transporting kangaroo carcasses after claiming her grandchildren were traumatised by the sight of more than a dozen headless kangaroos in the back of a ute.

Christine Selim said she was driving on the Northern Highway between Kilmore and Broadford with her grandchildren last month when she noticed what she thought were tree branches hanging out of a ute in front of her on the road.

“I actually said to the kids, ‘oh that’s a bit dangerous, there are branches hanging over the side of the ute’,” she said.

“From a distance that’s what I thought it was. Then we got closer and we saw what it was.

“There were about 15 or so kangaroos with their heads chopped off hanging upside down in the back of the ute with their limbs hanging over the sides.

“My grandchildren were hysterical. My oldest grandson is eight. I tried to stay back from him [the ute driver] because the kids were so upset, but we were behind him all the way to Seymour where we live.”

Ms Selim contacted Seymour police and the Department of Environment, Land, Water and Planning after the incident but was told the driver of the ute had not broken any laws.

A Seymour police spokesperson confirmed the driver of the ute was licenced to shoot kangaroos and was operating legally.

“We’re aware of the man who does it. He goes out and hunts [kangaroos] on farmers’ properties and hands them into the abattoirs for dog meat,” the spokesperson said.

“He’s quite a regular contender in the area. It doesn’t look great, but it’s all by the books.”

A spokesperson for the Department of Jobs, Precincts and Regions’ kangaroo harvesting program said there were sets of regulations governing the transport of kangaroo carcasses for both human consumption and pet food.

They said people could submit any complaints to Victorian meat regulator PrimeSafe at www.primesafe.vic.gov.au/contact-us/complaints/for investigation.

“Under the kangaroo harvesting program, carcasses have to be transported in accordance with food transport regulations,” the spokesperson said.

“All vehicles used to transport carcasses must be licensed by PrimeSafe.”

Ms Selim said standards for transporting carcasses should be changed.

“Surely they need to be covered or something like that. And why on earth did they have their heads cut off?” she said.

“People need to know what happens to these poor animals. For them to have their heads cut off and be paraded around for the public to see like that with their limbs hanging off the side of the ute is totally disgusting and wrong.”