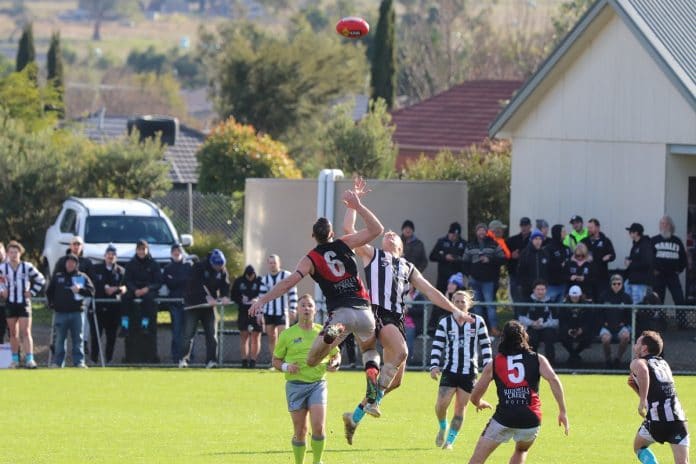 ROMSEY and Wallan showed no ill effects from a four-week break from Riddell District football, each recording big wins on Saturday.

The Redbacks set the tone early with a five-goals-to-none first quarter and sustained the pressure from there, allowing their opponents little latitude.

Coach Paul Kennedy praised the way his team handled the COVID-19-induced layoff leading up to the game.

“It was really pleasing because before we went off with the COVID break I thought our last game against Melton Centrals was pretty poor,” he said.

“As a coach you’re worried about how you’re going to come back after a few weeks off, but they acquitted themselves really well. They trained well through the week to get themselves fit leading up to the game and the results showed.”

Matt Burkett was a driving force for the Redbacks, with Kennedy estimating the midfielder picked up ‘about 45 touches’.

Only inaccuracy prevented full forward Jack Jedwab from a special performance, with the spearhead missing some gettable chances in a haul of 8.8.

Nathan Rayment was also among Romsey’s best in his 100th game for the club, booting four goals from a forward flank, while Nathan Hoy continued his strong season in the ruck.

The Redbacks, who have the second-best percentage in the league behind Wallan, could vault as high as second place on the ladder next week if they beat Macedon and other results fall their way.

But Kennedy warned his side against complacency.

“If we don’t win and other sides do, we could slip right back into the pack,” he said.

“It’s very tight and it’s going to be pretty congested all the way until the end, so we’ve just got to try to keep winning games and beat a couple of sides above us.

Wallan faced what on paper appeared to be a critical test against previously undefeated Riddell, but ran away with the match after a tight first quarter at Greenhill Reserve.

Steven Boyall was one of many Magpies to impress in the win, using his leg speed to kick a goal and set up opportunities for the likes of Corey Grindlay, four goals, Michael Mannix, three, and Shaun Stewart, two.

Corey Viani had another impressive game on the ball and Patrick Mahoney was outstanding in the ruck.

League-leading goal kicker Matt Perri had his quietest game of the season with one major, meaning the Magpies could have even more scope for improvement after they return from this weekend’s bye to face Woodend-Hesket in round nine.

Lancefield, meanwhile, will turn its attention to a winnable game against Melton Centrals after going down 7.16 (58) to 5.4 (34) against Woodend-Hesket on Saturday.

The scrappy Tigers kept themselves in the game in the first half, but the sheer number of the Hawks’ scoring shots was a factor after the main break.

The 1-5 Tigers have a chance to earn their second win of the season against Melton Centrals, who are 1-6 with a similar percentage and sit one place below Lancefield on the ladder.

Blues win on the road, Laurimar still on top