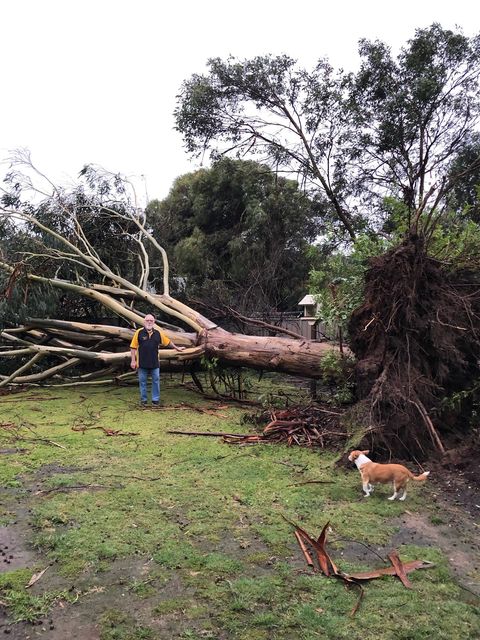 Many people are also without mobile phone reception as telecommunications companies battle to restore towers.

In the Mitchell Shire, hundreds of premises in Wandong, Heathcote Junction, Wallan, Kilmore, Pyalong, High Camp, Forbes, and Willomavin are yet to have power restored.

Most of the Macedon Ranges Shire was hit particularly hard, and Lancefield, Romsey, Riddells Creek, Darraweit Guim, Mt Macedon and surrounding districts have been affected by the power outage, which has had a widespread impact across central Victoria and Melbourne, particularly in the eastern suburbs.

Due to being overwhelmed with about 200,000 premises across Victoria suffering power outages, power suppliers AusNet and Powecor cannot confirm when individual areas will be restored. They have placed a blanket estimations of 1pm Sunday but many are being restored earlier.

Kilmore was savaged by gale-force winds, with the Victoria State Emergency Service, VICSES, unit inundated with calls for assistance.

Thousands of Kilmore residents were left without power for much of Thursday according to energy distributor AusNet’s website.

In a statement AusNet said the outages were caused by ‘extensive damage’ to its network.

“This is a significant event. We are working to safely assess the extent of the damage and prioritise repairs to critical sites,” the statement said.

“It may take several days to restore power to everyone. Our number one priority is safely restoring your power. Please stay well clear of damaged poles, lines or other equipment and do not drive through flood water.”

The Kilmore-Wandong Road and several other streets in the region were blocked by fallen trees today, with major roads cleared early this morning – either by emergency services or people with chainsaws.

All had been declared open on VicRoads’ website on Thursday afternoon.

Council staff urged people to exercise caution on the roads and take note of any road closure signs.

A Telstra spokesperson said mobile coverage had been affected across the region.

“The main issue we’re facing is the loss of mains power to our sites, so we’re working closely with power authorities and our power and facilities teams are on the ground to prioritise the restoration of key sites where we can do so safely,” the spokesperson said.

“Fallen trees are preventing road access to some of our sites and we need to wait for the path to be cleared before we can restore these services.

“Due to the loss of power impacting both mobile and fixed line services, a number of communities may be isolated and unable to call 000. We’ve prioritised the restoration of services into these locations as quickly as possible. These include some communities north and east of Melbourne and in South Gippsland.”

“In Seymour we’ve had somewhere around 30 or 40 jobs to attend,” she said.

“The last I heard, Kilmore had about 80 outstanding jobs, so quite a large amount.

“We’ve had crews coming in from Craigeburn and Benalla to help out as well.

“Seymour currently have around six or seven outstanding jobs, which we’ve got Seymour CFA and Hilldene CFA assisting with as well.”

Ms Welsh said most of the call-outs were in relation to property damage and traffic hazards caused by fallen trees.

She said Seymour SES members had to clear a path for an Ambulance Victoria call-out last night. Members also attended the scene of a two-car collision at Sugarloaf Creek yesterday afternoon.

“It’s probably the first time we’ve been stood down by the state guys due to the fact the wind was just ridiculous,” she said.

“We got stood down at about midnight last night and couldn’t resume again until about 7am this morning.

“Pretty much any jobs that were coming in, we just had to tell people we couldn’t come immediately due to the safety regulations.

“From what I heard a couple of vehicles over Dandenong way got hit by trees, and our support vehicle last night only missed getting hit by 10 metres or so. I fully understand getting stood down, as frustrating as it was.”

Ms Welsh said Seymour locals were understanding when they were told the SES could not immediately respond to their requests.

“We had one person whose roof had been almost completely ripped off, and we sought council assistance to get him somewhere else to stay for the night, which was fine and he was happy with it,” she said.

Kilmore Fire Brigade captain Hayden Dally said CFA members had been working alongside the Kilmore SES unit, but were also called off at about midnight last night.

“There’s been a fair bit of building damage and a lot of trees down, and still is,” he said.

“We got called off last night due to the conditions being too dangerous to be out in. The SES were back on it at about 6.45am this morning.

“There were a phenomenal number of calls for assistance in the Kilmore region.”

Many Kilmore businesses were closed this morning, with power outages across much of the town.

Power was also out in Lancefield this morning after a tree came down over a power line on the Woodend-Lancefield Road, pictured below.

Broadford recorded 94mm of rain in the past 24 hours, Kinglake reached 81mm, while Woodend recorded the state’s sixth-highest number of calls for assistance to SES.

An Ambulance Victoria officer said there were no major incidents in the Macedon area, but that Woodend had experienced a lot of damage.

Romsey Police also said they had been inundated with calls.

Between 7 and 8.30am, Mernda Police Station received more than 20 calls for assistance, which were mostly regarding fallen trees blocking roads.

“Some members of the public are getting their chainsaws out and helping where they can because there’s been a steady stream [of calls] this morning,” a Mernda police spokesperson said.

The majority of requests for assistance, 3370, are in relation to trees down on roads. A further 458 reported building damage, and 168 related to flooding.