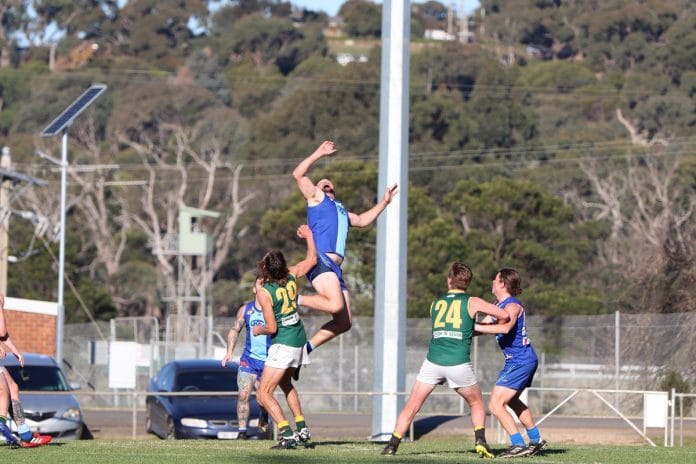 Playing in front of a home crowd, the Blues wrestled the Turtles to a draw in the first quarter before finding themselves seven points down at the main break.

Inspired by defenders Grant Paxton and Daniel Matthew, the Blues began to turn the game around in the third quarter.

The team put the clamps on the Turtles, holding the visitors to 1.1 for the quarter, while ruckman Michael McCulloch and half-forwards Nick Zaharakis and Bailey Taylor-Egan got the ball moving into the forward line.

Playing at home, Laurimar flexed its muscles with a 14-goals-to-two second half as 13 individual goal kickers got their names on the stat sheet.

Bradley Johnstone was Mernda’s best player in defeat, with three goals to Sam Rexhepi also earning him the plaudits of the coaching staff.

Kilmore and Laurimar both have what looks to be easy match-ups on the weekend, with Kilmore travelling to face the 1-6 Lalor and Laurimar on the road against winless Reservoir.

Mernda will play host to Heidelberg West as it searches for its third win of the season.

The Eagles missed opportunities to get themselves back in the match during the second quarter after trailing by 17 at the first change, and were outclassed in the second half.

Mitchell Andrews played his best game of the season for the Eagles, while Max Dyson and Nathan Andrews were also prominent, and Xavier Dimasi booted two goals.

Whittlesea will be at home against Hurstbridge on Saturday, with a second win of the season still within reach.