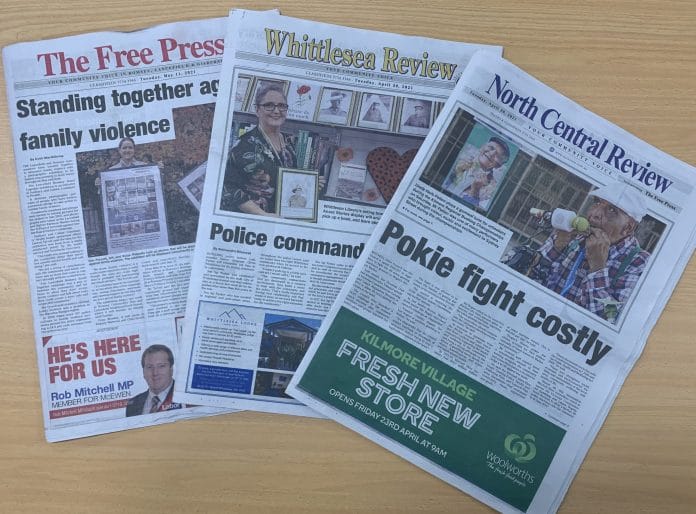 Australia’s biggest ever local news survey has highlighted readers’ passion for printed newspapers, and that they want a much bigger say in their community newspaper’s future.

Results from the national survey of local news audiences, conducted as part of the Media Innovation and Civic Future of Australia’s Country Press project, were released earlier this month.

Regional, rural and suburban voters also indicated the future of community newspapers will be a key issue at the next federal election.

The survey findings come as country newspapers have struggled to survive during the COVID-19 pandemic.

The survey asked almost 4200 press newspaper readers in rural, regional and outer suburban areas about the role of community newspapers within their communities and their ideas for innovation within the sector.

Only five per cent of younger audiences say they mostly use social media to find out about local news.

The survey also showed that audiences believe local newspapers should be collaboratively funded by a range of relevant stakeholders, including media companies, advertisers, subscribers, government and philanthropy to ensure their future.

While some media lobbyists and academics in Australia and internationally have called for newspaper subscriptions to be made tax deductible, 71 per cent of respondents are not in favour of the move.

Audiences indicated any additional funding for local news should be directed to employing more local journalists to report news, 71 per cent, over increasing digital connectivity, 13 per cent, and digital innovation products, 17 per cent.

Project leader Associate Professor Kristy Hess, from Deakin’s School of Communication, said the voices and perspectives of everyday audiences were often missing in policy discussion about the future of local media and people had offered innovative ideas to support their future.

“It’s clear that the local newspaper really matters to Australian audiences; personally, I don’t think that was ever in doubt,” she said.

“But we can see from this survey just how passionate readers are about the sustainability of news that provides good quality local content and keeps them informed about people and happenings in their community.”

The survey is part of a three-year project that aims to develop and road-test a new map to support local news media in the digital era.