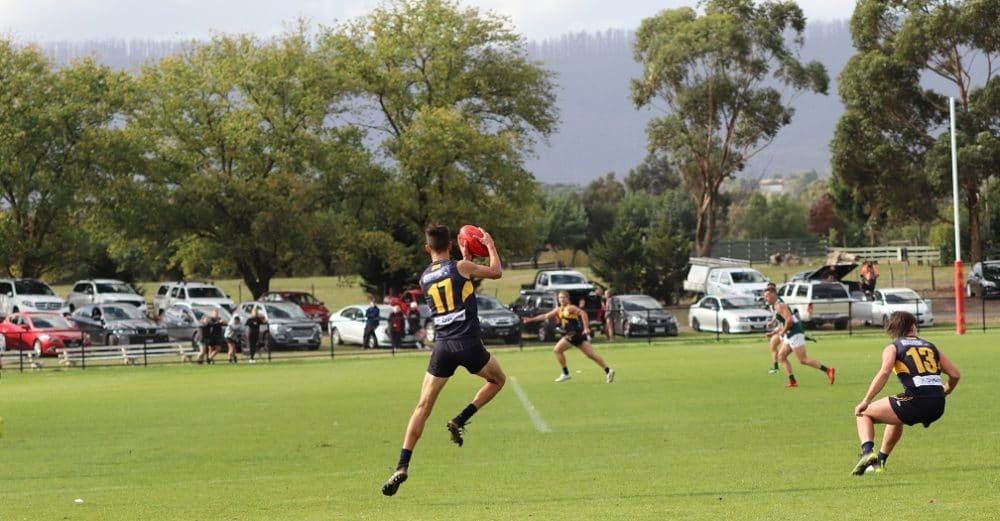 The Eagles have been out to prove they belong in the league’s top level since being promoted after winning the division two premiership in 2019, and coach Blair Harvey said the victory would do wonders for the team’s morale.

“After the game I talked to the boys about having confidence and belief that we belong in first division,” he said.

“We showed some pretty good signs the week before against West Preston-Lakeside, and we thought we had a little bit of momentum even though we lost that game.

“To get your first win for the year is pretty important, so we’re pretty happy but we’ve still got a long way to go.”

Saturday’s match at Whittlesea Showgrounds was a hard-fought affair, with the Eagles just ahead at half time and holding off North Heidelberg to win 10.12 (72) to 8.11 (59).

The Eagles’ midfield was instrumental in the win, with ruckman Sam Peet giving the likes of Xavier Dimasi, Blake Watson and Tom Falls first use of the football.

Whittlesea’s edge in the clearances provided plenty of opportunities for Paul Higgins, who was moved forward from his usual position in defence and booted the first five goals of the game.

Harvey praised the effort of his midfielders.

“I think our midfield set the tone early. We sent Paul Higgins forward and with the boys in the midfield getting the job done, they were able to get the ball forward and he was able to get onto it,” he said.

Harvey said the Eagles would be in for another testing match on the road against McLeod on Saturday.

“They won their first game on the weekend, but they’ve had a lot of injuries and they’re a much better side than what the results show,” he said.

“We’ve got another really big game this week and it’s not going to be easy, that’s for sure. The win is great for our confidence, but we know that it will be tough going forward.”

In another positive for Whittlesea, Harvey reported no significant injuries for the first time this season.

With the reserves recording a 101-point win and several players set to return from stints on the sidelines, he said competition for places in the senior side would be fierce.

“There’s some pressure coming internally from players in the under 19s and reserves,” he said.

“We’ll just have to wait and see how it all pans out. The conditions look like they might be pretty wet, so that might affect selection. We’ll wait and see later in the week.”

Blues win on the road, Laurimar still on top

Blues grow from within