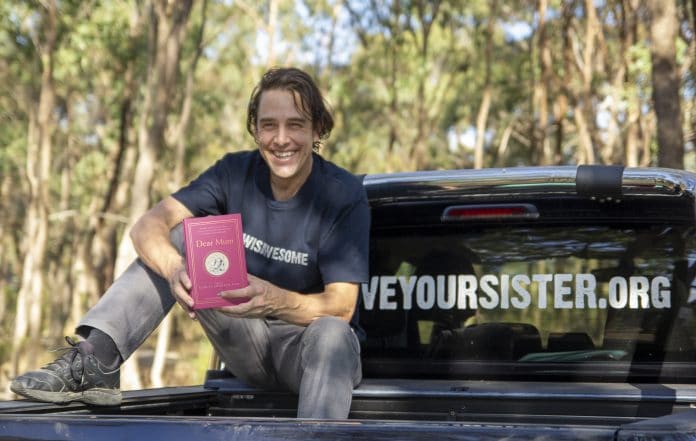 Gold Logie-winning actor Samuel Johnson invited others to contribute to their own letters to his new book Dear Mum with the brief to write with raw honesty.

Released in time for Mother’s Day, the book is a collection of 91 letters that notables including Guy Pearce, Stephanie Alexander, Shannon Noll, Amanda Keller, Peter Helliar and more, have written to their mums or mother figures.

“I thought if this was ever going to be a fitting tribute, it had to be real,” the Tallarook resident told the Review from the road on his Victorian book tour.

“Mumming is not simple and this book was never going to be a Hallmark book.

“We have an extraordinary array of mothers represented in these letters, so I’m relieved to [say] this book isn’t tokenistic.”

Compiled during lockdown, this is the fifth book Mr Johnson has published through his charity, Love Your Sister, to which all proceeds are directed.

He set up the not-for-profit when his sister Connie was diagnosed with breast cancer, and in 2013 and ’14 rode the circumference of Australia on a unicycle to raise awareness and money – $1.4 million.

In 2017 his cause captured more attention when he won the Gold Logie for his portrayal of Molly Meldrum.

Since then he’s paused his acting career and raised more than $10 million in honour of his late sister; he was named Victoria’s Australian of the year in 2018; and the charity has expanded to fundraise for treatments for all cancers, including genomic testing, which can help identify cancer risks and ensure patients are put on effective medication as early as possible.

“It’s important to me that all cancer patients are offered the latest in personalised treatment,” he said.

The idea for the book, which he said he had been saving because he wanted to ‘do it properly’, came from a supporter of Love Your Sister following his previous collections, Dear Santa, and Dear Dad.

But he said it had been the easiest book to put together because the response to his cold calls was overwhelming.

“It’s evident by the 91 letters in this book, which is more than any of our previous collections. The response was huge so obviously there’s some pretty rad mums out there,” he said.

Mr Johnson said the collection was diverse, but a universal theme of appreciation tied them together, adding that being a mother was the most important job in the world.

“They care in a sometimes-heartless world, they offer love and stability in uncertain times and they give us somewhere to go to when the chips are down,” he said.

“Is there anything more important?”

While there were some magnificent tributes to mothers, he said, so too were there some that were more complicated or deal with loss.

His unrivalled favourite in the book belongs to actor Guy Pearce.

“He writes a stunning tribute to his mum who’s been lost to dementia for 21 years,” Mr Johnson said.

“They made a deal: she never wanted to lose her marbles. He had an opportunity to come good on that deal, he didn’t, and feels he’s failed her, and the letter is an apology.”

Mr Johnson has also written a letter for the book, to his mother who committed suicide when he was three years old.

“I have no memories of her, there’s one photo of us that exists.

“She was a poet and I was lucky enough to stumble across about 100 of her poems in a filing cabinet when I was 21 and it was through her poetry that I got to know her.

“I found a poem addressed to me, written about a month before she killed herself … Through that poem I learnt that my mum loved me.”

Mr Johnson said he hoped the book would catalyse more letters this Mothers’ Day, and that he had been heartwarmed by how many people have included their letters in the folds of the book.

“‘I love you’ in a text is great, but a proper love letter will inevitably do so much more.”

Mr Johnson knows this firsthand because he asked his contributors if he could be present when they read their letter to their mums, and ‘every time there were tears of joy’.

Dear Mum and Samuel Johnson’s other books, are available online at loveyoursister.org. People can meet Samuel in person and pick up a signed copy at his Mothers’ Day stall at the Bendigo Showgrounds Market on Sunday, 9am to 10.30am.